EPA was informed of multiple incidents at Poolbeg incinerator 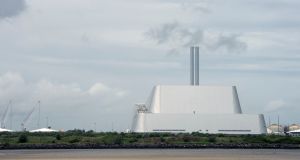 There were a number of environmental incidents at Dublin’s new municipal waste incinerator on the Poolbeg peninsula in the days after the facility began burning waste, it has emerged.

This is in addition to “a major incident” on June 7th when a total of 11 workers were hospitalised when a small amount of lime, which is used to trap pollutants but is hazardous to humans, was released inside the flue gas treatment area.

Details of other incidents were reported to the Environmental Protection Agency on dates between June 1st and June 8th.

Covanta, the operators of the plant, said on June 8th it was satisfied the source of the leak was a door seal that was “not properly fitted”.

Commissioning was suspended following orders issued by the Health and Safety Authority and the EPA.

Dublin City Councillors subsequently criticised the company for a delay informing relevant authorities and the local community about the discharge on June.

Details of the additional incidents were outlined at a meeting of Dublin City Council Environment Strategic Policy Committee on Wednesday by committee member Joe McCarthy, a nominee of An Taisce and part of the local campaign group opposed to the incinerator.

Mr McCarthy claimed that based on an EPA log, there was “a catalogue of errors” in early June, necessitating three notifications in relation to four incidents over that period.

In addition to the “major event” on June 7th, lime ash was also found on the ground in the “baghouse” area of the plant on a previous date, he said.

He also claimed there was a release of powdered activated carbon contained in what is known as fly ash (a hazardous by-product of incineration) on June 7th in addition to the lime discharge, which immediately formed a cloud and rose up through that section of the plant.

This inevitably contained dioxins and mercury, he alleged, and the workers should have been tested for exposure to these toxic discharges.

The EPA confirmed it was investigating a number of incidents which occurred during commissioning of the Dublin Waste to Energy Ltd facility – it is due to become fully operational in September.

“The incidents relate to breaches of the licence conditions which occurred between June 1st and June 8th, 2017,” it added.

An EPA spokeswoman said, however, it is “satisfied that there was no risk to human health or the environment arising from the incidents”.

In relation to the lime ash incident, she said the EPA “is aware that the lime released may also have contained fly ash”.

She added: “We are satisfied that there was no release of lime to the external environment and therefore no risk to the public. The HSA who are investigating the health and safety aspects of the incident are also aware of this.”

Operations at the facility remain suspended, she confirmed.

“The EPA is considering further enforcement in relation to the matter. As the investigation is on-going we are not in a position to comment further at this time,” she said.

Covanta said they were “working closely with the HSA and EPA to ensure that the facility in Poolbeg will operate to the highest international standards and to ensure the absolute safety of its workers and contractors on site”.

The matters referred to by The Irish Times occurred during the early stages of commissioning, it said.

A HSA spokesman said, from a worker safety point of view, it was only investigating the incident which happened on June 7th.

There may have been other environmental incidents on other dates but they were a matter for the EPA.

Their investigation was on-going and the authority was not in a position to indicate when its prohibition order might be lifted, he said.