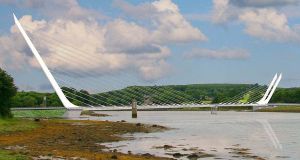 An artist’s impression of the proposed Narrow Water bridge at Carlingford Lough.

The EU has withdrawn an offer of €17.4 million towards a project spanning Carlingford Lough because additional funding has not been found.

Pamela Arthurs, chief executive of the East Border Region economic development organisation, said the development was “shovel-ready” and would have been a symbol of progress.

“The bridge can still be done if there is money, but the planning permission is running out in October of this year,” she said.

“Louth (County Council) have permission for the scheme and are trying to get that extended, but there is no money on the table so really I suppose if we now had an Executive with this additional money, it might be that there could be money leveraged.”

The DUP secured £1 billion extra funding for Northern Ireland as part of its deal to support the Conservatives in crucial Westminster votes.

The cable-stayed bridge, 195 metres long, has been in the planning process for years and would have connected Cornamucklagh near Omeath, Co Louth, with Narrow Water near Warrenpoint, Co Down, at an historic crossing point.

The entire build would have been 620 metres long. Backers of the scheme claimed it was crucial to the prospects for economic regeneration and reconciliation of the border community in Louth and Down.

“Certainly we feel it is pivotal in this area for economic development and tourism,” Ms Arthurs added.

“There would be a lot of spin-off businesses and development as a result of the bridge.

“There is a lot of support here and because we have come so close to it a few years ago, it would be really disappointing for us to lose planning permission and for it not to happen.”

Stormont’s Finance department was the last body to commit to fund the scheme, with £2.7 million (€3.6 million) allocated to the bridge. Former finance minister Sammy Wilson gave approval for the project with a number of financial conditions and undertakings from both Louth and Newry and Mourne councils.

Council bosses in Co Louth pulled out after bids for the job from construction firms came in substantially above budget.

Fianna Fáil spokesman on cross-border cooperation Declan Breathnach TD said: “My fear is that in the absence of an Executive, the case simply will not be made where it matters and this once-in-a-decade opportunity to get the project over the line will be lost.”

Michael Curran, an early proponent of the development, said there was major traffic congestion getting from the M1 motorway heading north to the Mournes. “The potential for the Mournes is enormous at the minute ... the bridge is a necessity.”