Congealed blood in freezers and rodent evidence found at eateries 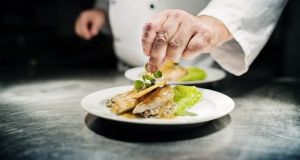 Congealed blood in freezers, evidence of “rodent activity”, and large accumulations of dirt and debris resulted in the temporary closure of five food businesses by the Food Safety Authority of Ireland last month.

A takeaway, cafe, two shops and a pub, serving food in Cork, Waterford, Louth and Laois were served with enforcement orders due to the risk their food posed to the public.

Separately the authority published details of a Dublin restaurant, Camden Rotisserie at 37 Lower Camden Street, which was served with a closure order last year, but had appealed to the District Court. The appeal was subsequently withdrawn.

The African Shop/Costello Stores, 87 Shandon Street, Cork was last month closed after “ an extremely large build- up” of “congealed blood, food debris and dirt” which posed “a grave and immediate danger to public health” was found in all freezers on the premises.

The walls, ceiling, floors and shelving of the shop were “in an extremely poor structural condition with significant amount of holes noted throughout the floor of the premises”. There were also “ large accumulations of dirt and debris throughout the entire premises which poses a grave and immediate danger to public health,” the authority said.

Also in Cork, Mr Kebab, 99 Lower Glanmire Road, was closed after “filthy” matting, a build up of dirt and grease on equipment and dirty cloths, were found. The poor structure of the building and a lack of instant hot water for handwashing also led to the closure.

The Exchange Bar, 1 Ballybricken, Waterford City was closed due to “evidence of rodent activity” in the bar area, posing a risk of contamination to “foodstuffs, food preparation surfaces, equipment and utensils”.

Oriental City and Noodle House, Keen Market, Mountmellick Road, Portlaoise, Co Laois was closed because it failed to ensure adequate pest control and had failed to keep the premises clean.

The cold room, walk in freezer, and three storage areas of the Londis shop in the Bellurgan Service Station, Co Louth, were closed due to evidence of rodent activity.

Evidence of rodent activity was also found at Camden Rotisserie, a Dublin city chicken restaurant, with “rodent burrow holes” found to the rear and under foundations of the building.

“Rodent bait was evident at the rear outdoor area of the food premises and was gnawed and eaten by rodents,” the authority said. There was also an “infestation of crawling insects” in a food preparation room.

Food storage and preparation areas were found to be in a “dirty condition with old food debris and heavy grease and grime build up which indicated they had not been cleaned in a while or regularly”.

There were no hand washing facilities for food handlers who were handling raw meat in the rear food preparation area. A substantial amount of food had been pre-cooked including for whole chickens, chicken wings and chicken portions, but there was no date labelling to indicate when the food had been prepared and staff working in the premises were unable to confirm the date of preparation, the authority said.

“The above conditions lead to a serious risk of food being contaminated with pathogenic bacteria likely to render the food unfit for human consumption, injurious to health or contaminated in such a way that it would be unreasonable to expect it to be consumed in that state.”

The closure order was served on Camden Rotisserie last October, but the details of the closure had been withheld pending the court appeal.