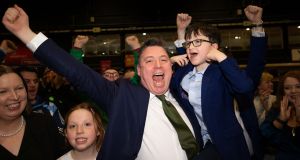 A new Lord Mayor of Dublin will have to be elected after the incumbent, Fianna Fáil’s Paul McAuliffe, took the last Dáil seat in Dublin North West.

His deputy, Fianna Fáil councillor Tom Brabazon, will step up on a temporary basis, but a new mayor to hold office until June will be elected at the next full council meeting.

The mayoralty rotates annually between the parties of the ruling group on the council, which includes Fianna Fáil, Labour, the Social Democrats and the Green Party.

It is likely that another Fianna Fáil councillor will be elected mayor for the remainder of this mayoral term.

Mr McAuliffe is among several city councillors elected to the 33rd Dáil including Sinn Féin’s Chris Andrews, Gary Gannon of the Social Democrats and Neasa Hourigan and Patrick Costello of the Green Party.

Their parties are entitled to co-opt new councillors in their place and can do so at the next council meeting or at a later meeting.