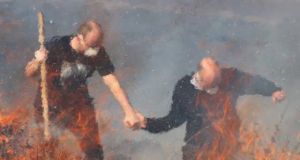 A father and son battle the gorse fires in Donegal. Photograph: Brid Sweeney 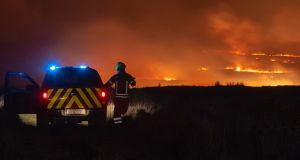 Fire crews from two stations working in to the early hours of Monday morning to bring a large mountain fire under control in east Clare. Photograph: Press 22 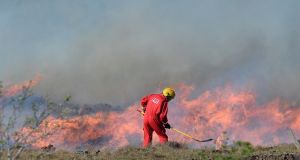 Firefighters and locals in Donegal fear further dry weather will cause a repeat of Monday’s huge wildfire which scorched hundreds of acres of land in the west of the county.

More than a dozen fire tenders and hundreds of locals attempted from 6am to halt the blaze, which first started in Annagry. The fire quickly spread to the neighbouring villages of Loughanure and Belcruit and towards Dungloe.

At one stage a fire crew became surrounded by the flames in Belcruit and had to wait for support from a helicopter which doused an area with water , clearing them a way out.

Minister of State with responsibility for Defence Paul Kehoe scrambled Air Corps helicopters and Army personnel to the scene at around 1pm.

Fianna Fáil TD for Donegal Pat ‘the Cope’ Gallagher criticised the length it took Mr Kehoe to make a decision on the matter, saying the fires were “out of control” and needed to be stopped before they spread to nearby homes.

Donegal County Council decided to employ a private company to bring in a helicopter to spread water over the flames. Water for the helicopters was taken from nearby lakes and spread over the most severe sections of the fire.

There was no indication on Monday night as to how the fires started.

Micheal Mac Giolla Easbuig, a Donegal county councillor who joined the effort to stop the fire, described it as “very intense” and said efforts to quench it had been hampered by wind.

“As soon as the fire service get it under control the wind whips up the flames again,” he said. “The community response has been amazing but we are still in the middle of trying to bring this under control.”

The council appealed to

landowners in west Donegal to cut back vegetation near homes and oil tanks which could potentially catch fire.

“Landowners and members of the public are urged to be vigilant and to report any uncontrolled or unattended fires immediately to the Fire Service by dialling 999 or 112,” a council spokesman said.

“Donegal County Council would also like to remind landowners and members of the public that under the Wildlife Act 1976 and the Wildlife (Amendment) Act 2000 it is an offence to cut, grub, burn or otherwise destroy any vegetation growing on any land not then cultivated between March 1st and August 31st in any year.”

A high fire risk notice remains effective for all areas where plants such as gorse, heather, dried grasses and dead vegetation exist.

A fireman attempting to halt the blaze told the Donegal Daily website: “This is unreal stuff. I have battled a lot of gorse fires over the years but this is amongst the most dangerous.

“Everything is bone dry and there is a strong wind so these are perfect conditions for the fires to spread rapidly.”

Locals organised buses and shared cars in a effort to bring people to help in areas hit hardest by the fires to try to prevent them from spreading. Shops and businesses provided water, food, face masks and shovels to those involved in the effort.

Minister for Education Joe McHugh, a local TD, was due to travel to the affected areas on Monday night to see the scale of the damage and assess what help is needed and can be provided.

Meanwhile, fire crews in Clare worked into the early hours of Monday to bring a large mountain fire under control at Woodfiled near Mountshannon.

Firefighters had to make their way across difficult terrain to reach the blaze, which took several hours to extinguish amid windy conditions. There was no immediate indication of how this fire began.

This followed an fire close to forestry at Flagmount on Saturday, which is understood to have been started deliberately. Gardaí are investigating the incident.