Irish scientists help unveil mystery of how stars are formed

Study has, for first time, measured total mass and energy from jet driven by massive protostar 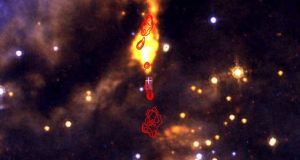 New insights into how stars are formed have been discovered by a team of Irish and international researchers.

Researchers from the Dublin Institute of Advanced Studies (DIAS) have led a study that has, for the first time, measured the total mass and energy from a jet driven by a massive protostar.

Protostellar jets play a key role in star formation and these new measurements and the values obtained imply that a common mechanism is in place in the formation of jets in low-mass and high-mass protostars.

The work was conducted by the star formation group from DIAS and University College Dublin (UCD).

Rubén Fedriani, a PhD student at both institutions, lead the international collaboration and said the discovery brings the scientific community “one step closer to filling in the gap between low-mass and high-mass star formation”.

“The red contours we see in the photos indicate in centimetres the wavelength radio emission from ionised gas produced by shocks, now revealing also the counter jet, which is made invisible in the infrared by the dense dust cloud that is collapsing to form the star. The white cross indicates the position of the massive protostar,” he said.

“We are on the cutting edge of science in this area, and having access to the best telescopes in the world via Ireland’s membership with the European Southern Observatory, and collaborating internationally has helped greatly in getting us there,” he said.

Co-author of the study Alessio Caratti o Garatti said: “This research is another important piece of the puzzle. After many years of debate, we are finally understanding how massive stars form, namely accreting matter from discs, while at the same time ejecting powerful and highly collimated jets.”

The team used data from the renowned Hubble Space Telescope , Karl Jansky Very Large Array and from the Very Large Telescope at the European Southern Observatory.