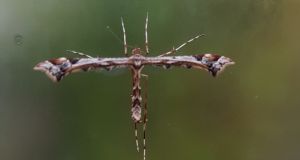 I saw this insect (above) on the sun room wall at the end of September. Catherine Nash, Ballinteer, Dublin 16

This exotic looking insect attached itself to the inside of my sun room wall.
James Brennan, Clontarf, Dublin 3

I was driving along the Mall in Dingle when an otter crossed the road directly in front of the car and disappeared through the gate of the Garda station.
Patricia Coady, Dingle, Co Kerry
On parole?

We found this object at Bertra Beach when the tide was out. It looks like the hatched eggs of something.

Sarah Harvey, Westport, Co Mayo
They are the egg or embryo capsules of the dog whelk. The embryos hatch out inside the egg cases and emerge when they are ready for independent life.

I saw this dead fish on a beach in Co Cork washed up after Storm Ophelia.
Jane Harvey, Abbeyleix, Co Laois

It is a trigger fish. The dorsal fins are not visible in the photo, but it has a very strong first dorsal fin which can be raised and locked like a trigger. It is used to wedge the fish in crevices to escape predators.

Ethna Viney welcomes observations and photographs at Thallabawn, Louisburgh, Co Mayo, F28F978, or by email at: viney@anu.ie. Please include a postal address.