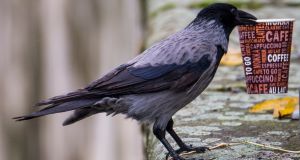 Urge to recycle? A blackbird gets set to fly off with an empty disposable coffee cup in its beak on the banks of the river Spree in Berlin, November 2nd, 2017. Photograph: John MacDougall/AFP/Getty Images

Coffee lovers could be facing a price increase for takeaway coffees, the Department of the Environment says.

A new “latte levy” is being considered which would see an additional 10-15c being added to the price of a coffee.

The levy would be applied in a similar manner to the plastic bag levy, introduced in a bid to cut down on waste.

The measure is being mulled by the Government to try to cut down on the use of disposable coffee cups and encourage people to bring along their own reusable ones.

Minister for the Environment Denis Naughten confirmed the move is being researched as some 2 million disposable coffee cups are currently sent to landfill sites in Ireland every day.

The Minister plans to introduce other incentives to encourage customers to bring their own cups to shops.

“Some of the areas that we will be looking at involve the potential for local authorities becoming part of a nationwide scheme where customers could sign up, for a small fee, in order to return their used reusable cup to participating cafes and bakeries and get their next coffee served in another reusable cup,” said Mr Naughten.

Talks have already taken place with major companies, including Insomnia and Supermac’s, in a bid to find an agreement.

The Minister is working closely on proposals with his Scottish counterpart, Roseanna Cunningham, who has indicated her intention to apply a 5 per cent charge on single-use coffee cups.

Mr Naughten said he wants to try to change consumer behaviour through financial incentives, reusable alternatives and better communication around the environmental impact of coffee cups.

A standard takeaway coffee in a Dublin cafe costs in the region of €2.50, meaning such a levy would bring the cost to about €2.65.

A pilot project is under way in the Minister’s constituency, where Roscommon Tidy Town has launched its own “Rossie” reusable cup.

“Most of the cafes and shops in the town of Roscommon are giving discounts to customers who use these cups, while helping a good cause and protecting our environment,” he added.

The Green Party has welcomed the levy proposal.

Leader Eamon Ryan said his party was happy to accept it as part of their Waste Reduction Bill 2017, which legislates for a total ban on non-recyclable or non-compostable coffee cups.

“The Minister is correct – every day 2 million throwaway coffee cups are sent to landfill. This needs to change. But it needs to be part of a broader clampdown on plastic waste,” he said.

Mr Naughten noted other areas of concern he and Ms Cunningham were looking at, including the issues of waste dumped in seas from ships and trawlers, plastic pollution and illegal dumping of tyres.