More than 150,000 people must make alternative travel arrangements due to action 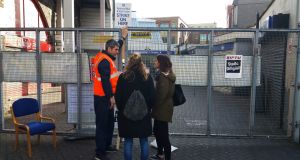 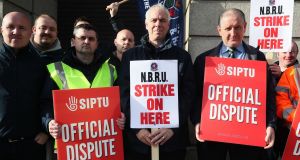 AA Roadwatch has warned of heavy traffic on a number of routes across the capital and on the outskirts of Dublin this evening due to the Irish Rail strike.

The second 24-hour strike led to heavier than usual congestion on many roads on Tuesday, with delays continuing into the evening as rail services remained at a standstill.

There has been no sign of a break through as Irish Rail staff continued their second 24-hour strike in a dispute over pay. More than 150,000 people were forced to make alternative travel arrangements on Tuesday, while the stoppage also hit company revenue and workers’ wages.

Tuesday’s strike action is the second of five scheduled by unions who want a pay rise of 3.75 per cent. Further strikes are planned for November 14th and 23rd and on December 8th.

No Intercity, Dart or Commuter routes rail routes are operating on Tuesday. Luas, Dublin Bus and Bus Éireann are operating as normal. Belfast/Dublin Enterprise services are operating between Belfast and Newry only in both directions.

AA Roadwatch is advising motorists to allow extra time to get home with congestion building across the city.

There are delays on the Naas road leading out to Citywest with a crash at junction 2 Kingswood adding to the traffic. In the south of the city, traffic is slow on Northumberland Road, Anglesea Road, Shelbourne Road and there are queues along the Grand Canal.

Traffic on the Strand Road is heavy in both directions and there are delays on Pearse Street.

Have your say: Have you been affected by the Irish Rail strikes?

St John’s Road West has outbound delays from Heuston Station to the SCR junction and traffic at the Chapelizod Bypass is slow.

Traffic is bad from Clanbrassil Street through Christchurch and out the Phibsborough Road and there are delays on Bolton Street and the Swords Road. The Stillorgan Road and Clarehall Road are also busy.

The M50 is busiest northbound at junction 13 Sandyford and junction 11 Tallaght to junction 9 Red Cow.

AA Roadwatch also reported delays eastbound on the M4 Sligo/Dublin road from before J7 Maynooth to J5 Leixlip, and from J4 Newcastle through to the M50.

There are long delays from Washington Street onto the Western Road and out to Victoria Cross. It’s also slow both ways between there and the Wilton. Bishopstown Road is slow both ways passing Cork University Hospital and it remains slow outbound from Summerhill to Ballyvolane on the Ballyhooly Road.

Traffic is busy around Douglas and the N40 South Ring Road is slow eastbound.

In order not to cross the picket line in Galway, Bus Éireann drivers are operating from a site close to the station.

While Bus Éireann inter city services to and from Galway are running as normal drivers are collecting and dropping passengers outside the boundaries of the train station.

Intending passengers are being advised to go directly to Fairgreen Road behind the station for all departures. All arrivals into the city will stop at that location until Tuesday evening.

Outbound traffic is quite slow on the Dublin Road where a stop/go system is in place for works and traffic lights are out of action at the Doughiska Road. Traffic is also busy between Moneenageisha and the Connolly Avenue junction, in both directions on the Tuam Road and between NUIG on the University Road and the Bodkin junction on the Headford Road.

There are delays in both directions on the Newcastle Road.

In Limerick, traffic is busy heading into the city on the Ennis Road going over Sarsfield Bridge and onto William Street. There are also outbound delays on O’Connell Avenue approaching Punches Cross and it’s busy outbound from Bridge Street onto the Corbally Road.

Irish Rail workers are striking as they want a 3.75 per cent a year pay rise over three years to match wage increases to salary given to Luas and Dublin Bus Workers.

Irish Rail says if passengers booked online to travel on the day of the strike, bookings will be cancelled and customers will receive an automatic refund seven days before the date in question.

If commuters have a monthly or annual season ticket, they will have the opportunity to apply for a refund to cover the days affected by strike action.

Drivers are being urged to be patient as delays are expected to continue again this evening as commuters make their way home.