Eye on Nature: Your notes and queries

Ethna Viney on a brilliant John Dory, a centipede and a crane that’s really a heron 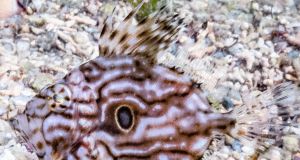 I found this fish in about 4m of water in Tra an Doilín in An Cheathru Rua. It was about 2-4cm in diameter, oval in shape and had a large false eye in the middle of its body. I have been told that it’s a juvenile John Dory.
Spyro Ó Cuiv, Conamara, Co na Gaillimhe

The juvenile John Dory loses all its brilliant colours as it grows to a possible 40cms.

There were about 20 of these common butterflies on asters on September 5th. They were still around since then but not so many.
Kay O’Flynn, Dungarvan, Co Waterford

It was the second brood of small tortoiseshells, which will go into hibernation soon.

I found this creature in the garden; can you tell me what it is?
Melissa Newman, Strokestown, Co Roscommon

Could you identify this strange-looking insect my daughter found inside her house? It seems to be a moth but the colouring is surely unusual.
Mary D’arcy, Ballsbridge, Dublin 4

It’s the angle shades moth. The brown area on your moth is more usually green, but can be either.

This crane is a resident of the river Dodder near Dodder Park Road. Here he took a fancy to a nice car in Terenure. My wife took the photo while out running.
Diarmuid O’Brien, Rathgar, Dublin 6

Some Irish people call that bird a crane. The crane does belong to the same family, but it’s a heron.

My son spotted this cleverly disguised caterpillar on a birch tree in the garden.
Miriam Tuohy, Kilmacanogue, Co Wicklow

The caterpillar of the peppered moth can be very variable in colour. It can be brown, brownish green or green like the moth, which can be light speckled or very dark.