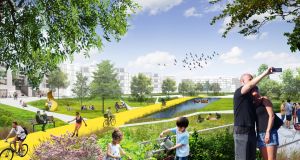 An illustrations from the plans to redevelop Colbert Station Quarter in Limerick.

A major plan to construct thousands of homes on over 100 acres of State-owned land in Limerick city with Colbert rail station as a central transport hub will be published on Wednesday.

The plan, spearheaded by the Land Development Agency, would see thousands of jobs created in the construction of homes and amenities on lands owned by CIÉ, Limerick City and County Council, the Health Service Executive, the Department of Education and the Department of Justice.

The first phase of a three-phase plan, to construct 400 homes by 2023 on 16.5ha of council-owned lands, “has already received a €6 million grant from the Department of Housing, Local Government and Heritage”, according to the plan, A Vision for Colbert Station Quarter, Limerick.

It aims to “open up underutilised lands” and create a “new gateway” to Limerick, focuses on developing cycling, pedestrianisation and “reducing the dominance of the car”.

This should be done via “a network of connected parkland and greenway recreational areas” with Colbert rail station as the focal point, it says.

Grafton Architects proposes a “key focus” on developing housing for in the region of 9,585 people in 3,195 residential units, with buildings ranging in height from three to nine storeys.

It also proposes commercial space and a significant amount of space for the community including parkland, sports fields and recreation grounds.

Sean O’Laoire of MOLA Architecture has proposed the selected lands would be 80 per cent residential, with 20 per cent for other uses and could host a population “of 6,000-10,000 people” in buildings of three to six storeys.

However, Anne Kiernan, chief architect with Transport Infrastructure Ireland, proposed “a population of approximately 5,250 in 1,200 residential units with an additional 1,300 student beds”. Ms Kiernan added that considerable office and enterprise units could be developed “with immediate access” to railway lines.

Sustainable transport was prioritised in proposals from Piotr Mach of eml Architects. And he estimated “the extended Colbert Station Quarter could be home to up to 26,000 people in up to 6,000 homes, including 3,000 apartments around a proposed central park”.

Building heights “should be mostly four storeys in order that most units will serve as de-facto walk-ups, like most apartments in the EU”.

The draft report also proposes an “urban commonage” in which a new gateway to the city would cross rail lines on a parkland bridge with entry points, paths, pedestrian and cycle bridges, all connecting existing and new communities.

Former secretary general at the Department of Finance, John Moran, who is chair of the Land Development Agency, said the proposed “transformative” development would cost “billions”. He said it was “a prime opportunity” for Limerick to provide adequate housing, health and social investment to meet expected increases in population.

“The willingness of the primary landowners, CIÉ and the HSE, to join the journey” has given “these lands the potential to once more be transformative, with affordable homes at its core”, Mr Moran said.

The report also proposes “tackling vacancy and dereliction, and removing hotspots for anti-social behaviour/dumping” in disadvantaged communities, through “a cross-directorate plan with input from An Garda Síochána, with targeted CPOs [compulsory purchase orders] and council acquisitions”.

A series of public consultations and a draft framework report will be published between now and 2021.