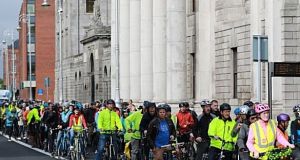 The intended bridge would have been the first dedicated cycling and pedestrian facility over the river. File photograph: The Irish Times

Plans for a €20 million bridge across the river Liffey are to be shelved indefinitely following An Bord Pleanála’s refusal to allow Dublin City Council to change its location.

This is the second time the planning board has refused the council permission to move the planned location of the bridge, the first dedicated cycling and pedestrian facility over the river, by 150m.

The council has had permission to build a new bridge over the Liffey, east of the Samuel Beckett bridge, since 2014. The bridge was to run from the old London and North Western Railway Company station on the northside to Forbes Street south of the river.

The Victorian train station had been the planned location of a proposed Dart Underground station for the north docks, but the Dart plan was shelved in 2011.

However in 2016 the National Transport Authority (NTA) asked council to defer building the bridge to allow the authority to review the underground plans.

While plans for the underground line have not been reinstated, it was determined, on the advice of the NTA, the council should relocate the planned bridge.

In 2018, the council applied to An Bord Pleanála to move the bridge 150m eastwards. The new location would connect New Wapping Street at the Central Bank building on the north side, with Blood Stoney Road on the south bank.

The council told the board the new location would allow the bridge to be delivered in a shorter timeframe “as there would be no need to wait for the outcome of the Dart Underground review, noting that the timeframe for the review is unknown”. Building a bridge over the planned rail tunnel would be “prohibitively expensive”, it said.

However in January of last year, the board refused the move, saying it preferred the original location because it offered “the potential of a direct connection from south of the river to a future Dart Underground commuter rail station”.

The council sought a judicial review of the board’s decision, claiming the board acted without jurisdiction and failed to give adequate reasons for its decision. However, it subsequently decided to instead submit a new application to the board, to amend the planning scheme governing the docklands to allow the bridge move.

The council made its application in August of last year. The board has this month issued its decision and ruled the original location of the bridge should stand.

In its ruling it reiterated its 2019 position that the original location would offer a direct connection to a future station, and also again said “notwithstanding the technical and cost arguments” it would better serve the interests and amenities of the area in the long term.

It is understood the council will not build the bridge at the original location, due to the high cost – likely to be more than double the current estimate – and the interference with the potential future Dart line.