Michael Viney: Mola mola, with its appetite for jellyfish, are in warmer Irish waters 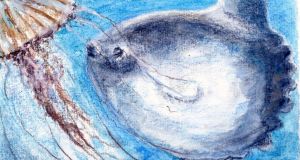 Mola mola: a near-circular disc of a fish with a rather small mouth, the sunfish swims mostly vertically. Illustration: Michael Viney

Measuring big changes in the life of the sea can mean poring over the records of tiny things such as plankton. But swimming into recent Irish calculations has come the biggest bony fish in the world and certainly one of the strangest.

Mola mola, the sunfish, can grow up to more than 3m long with a body mass of up to 2.3 tonnes. One of the biggest on record, at 3.6m, was encountered by divers in Brandon Bay, Co Kerry, in September 2003. And the website of Blasket Islands Eco Marine Tours currently claims that “hardly a trip goes by without an encounter with sunfish”.

Many of those in the seas off Ireland this summer would have been a lot smaller and younger than the biggest. But once a casual and little-studied curiosity, the growing abundance of Mola mola and its appetite for jellyfish have raised its significance for science.

A near-circular disc of a fish with a rather small mouth, the sunfish swims mostly vertically, like a great coin on edge. Long fins at top and bottom act as paddles and a stiff frill of skin is where the tail should be.

There’s a reason for this seemingly weird design. Sunfish spend only about a quarter of their time in the top 5m of the ocean, munching jellyfish, and the rest diving deep after seabed food and small fish. Near the surface again they tilt their big bodies, like mirrors, to the sun, basking in its warmth.

Their long absences from the surface means that counting them from an aircraft is tricky, with a one-in-four chance of spotting them. As one report put it, “the number of sunfish present in our study area could be up to five times greater than the estimates presented here”.

This survey, published online in 2017, was mounted by researchers from University College Cork. It covered some 300,000sq km of the northeast Atlantic and offered first estimates of sunfish: at least 12,702 in the summer and 8,223 in the winter. It modelled a daily consumption of 2,600 tonnes of jellyfish.

In the same year, French researchers published a paper headed “Ocean sunfish as indicators for the ‘rise of slime’.” They had undertaken “the most extensive aerial surveys of sunfish ever conducted and found surprisingly high abundances off the Atlantic and Mediterranean coasts of western Europe”.

With up to 475 sunfish per 100sq km, researchers estimated a remarkable 20,774 tonnes per day of predated jellyfish. Ocean warming, they suggested, and the overfishing of predatory sharks, could have led to sunfish abundance.

Reports of “surprisingly high densities” of the species are also noted in research for the Environment Protection Agency on “tipping points” of change in the Celtic Sea, just published online (EPA Report 335).

Its authors, led from the Galway Mayo Institute of Technology, looked at regular sunfish sightings from the bird observatory on Cape Clear Island, off Co Cork, and found they increased markedly after the mid-1990s. This matched rising numbers of siphonophore jellyfish. But the study calls for more research to understand how the environment shapes abundance of “this important planktivorous predator”.

Tipping points are abrupt changes that can switch an ecosystem to an alternative state. The study looked at long-term past data for early warning signals from step changes. A main aim was to develop statistical tools for use “to learn from the past”.

Details of the great increase in jellyfish came from the nets of the Continuous Plankton Recorder Survey towed behind volunteer ships from the UK since 1931. They showed that jellies could, at times, make up to 42 per cent of the total biomass of zooplankton. This ecosystem shift, or “step change”, became marked in the late 1990s.

It was around 1990 that another “change point” occurred, as southwest winds in the Celtic Sea reached greater strength and frequency. They dispersed herring larvae from the fish’s spawning grounds off the south coast, carrying them offshore into deeper water and round into the Irish Sea.

Among the study’s analysis of records of tiny things were those of the otoliths, or earstones, of fish. These pea-sized, pearl-white structures, floating beneath the fish’s brain, are routinely archived by the Marine Institute in its annual sampling of ocean fish to estimate age and abundance of stocks.

Age is shown in the added rings of otoliths, like those in slices through trees. But the growth measurements, compared across fish, can also show responses to ecosystem shifts. The study found that fish were getting smaller in the Celtic Sea with increases in sea warming.

Most notably, the herring showed a sharp drop in size from the mid-1970s to the 2000s: the length of a four-year-old fish decreases sharply above a sea surface temperature of 14.1 degrees.

Big Irish herring have gone. Sunfish, on the other hand, find this even better for basking, its numbers increasing as the ocean warms.

US election: How will the outcome affect the global climate crisis?