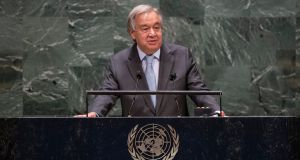 UN secretary-general António Guterres: “The climate emergency is fully upon us, and we have no time to waste.” Photograph: Eskinder Debebe

The United Nations has announced plans to gather “the world’s most ambitious climate leaders” in December on the fifth anniversary of the Paris Agreement in an effort rebuild global momentum in tackling global warming.

The announcement was made by UN secretary-general António Guterres at a Climate Week event he hosted in New York on Thursday – it is coinciding with the UN General Assembly. It comes in the wake of announcements from China and the European Union scaling up ambition.

While the world remains off-track to limit global temperature rise to 1.5 degrees, this week’s announcements “send a resounding signal that decarbonisation of the global economy is increasingly irreversible and offers huge advantages to those who move decisively”, Mr Guterres said.

“We have champions and solutions all around us, in every city, corporation and country. But the climate emergency is fully upon us, and we have no time to waste. The answer to our existential crisis is swift, decisive, scaled-up action and solidarity among nations,” he added.

In light of this, the secretary-general and UK prime minister Boris Johnson will co-host a landmark global event convening global leaders on December 12th this year to rally much greater climate action and ambition. The UN’s annual climate negotiations, known as COP26, are due to be staged in Glasgow in November 2021 after being postponed due to Covid-19.

National governments will be invited to present more ambitious and high-quality climate plans, as well as Covid recovery plans, new finance commitments and measures to build resilience that are aligned with limiting global warming to 1.5 degrees and the driving forward the agreed UN sustainable development goals.

The event will bring leaders from across all levels of government, as well as the private sector and civil society, to present new measures boosting ambition and action, Mr Guterres said.

China’s leader Xi Jinping this week committed to speeding up reductions in emissions in the world’s most-polluting nation and reach carbon neutrality by 2060.

If China achieves its goal by 2060, it could lower global warming projections by 0.2-0.3 degrees, the single biggest reduction measured since countries signed the Paris Agreement, according to Climate Action Tracker.

“This would mean that China, responsible for a quarter of the world’s greenhouse gas emissions, would phase out any conventional use of coal, oil and gas by the middle of the century; unthinkable a few years ago,” Prof Niklas Höhne of New Climate Institute said.

However, Mr Yuan said it was still unclear what “carbon-neutral” would mean, how it related to the global net-zero target in the Paris Agreement, what types of greenhouse gases were involved, and what types of carbon removal and potential offsetting would be included. “We expect more information to be revealed in China’s 14th five-year plan, which will include detailed development targets from 2021 to 2025.”

With two of the top-three emitters in the world now committing to carbon neutrality by mid-century, this could be the start of a broader “race towards zero” and more countries committing to higher emission reduction targets, he predicted. These commitments from China and the EU could also raise pressure on other large emitters and benefit the climate negotiations at COP26, he believed.