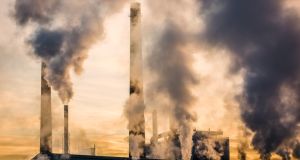 In its 2020 review the council stresses the urgency of “shifting from planning to action” if the country is to reduce emissions over the next decade, and get on track to achieve a net-zero emissions economy and society by 2050. Photograph: iStock

“A radical shift in gear” is required if Ireland is to meet its 2030 climate targets, especially reductions in carbon emissions, according to the Climate Change Advisory Council (CCAC).

In its 2020 review the council stresses the urgency of “shifting from planning to action” if the country is to reduce emissions over the next decade, and get on track to achieve a net-zero emissions economy and society by 2050.

Among key actions for the budget it recommends are an increase in carbon tax to €35 per tonne of CO2 and motor tax reforms to reduce expensive dependency on subsidising EVs.

In a multi-billion programme on retrofitting houses, it says buildings that deliver the biggest reductions should be targeted first.

It calls for better supports for farmers reducing their carbon footprint tied into forthcoming Common Agricultural Policy reforms. “Income support payments should be tailored to encourage farmers to reduce emissions, including through reduced fertiliser use, reduced animal numbers and increased carbon sinks,” it concludes.

The council is an independent advisory body tasked with assessing and advising on how Ireland is making the transition to a low carbon economy.

The review accepts ambition in the Programme for Government and developments at EU level “add more urgency” but stresses targets are only achievable by incorporating a range of additional policies and measures.

Overall national emissions, however, are showing no significant reductions, it adds. There was a 10 per cent reduction in the electricity sector in 2018, largely due to reduced operations at Moneypoint coal-fired power station. “Other sectors have not delivered emissions reductions on the scale required, with increases seen in some sectors,” it notes.

There will be a decline in emissions this year due to Covid-19, but this is likely to be a temporary effect. It is against the background of a warming world with 2019 being “the ninth consecutive year with temperatures above normal in Ireland and the winter of 2018-2019 was the warmest winter on record in 119 years”, the CCAC underlines.

“The imperative for climate action remains, despite the understandable immediate focus on Covid-19. Climate change is happening now. Recent extreme events, such as storms Ellen and Francis in August, show that we are vulnerable and that adaptation to climate change is essential”, said chairman Prof John FitzGerald.

“It is clear Ireland will not meet its 2020 targets, and that a radical shift in gear is required to meet its 2030 targets. With limited resources, the policy focus must be on delivering cost-effective, socially sustainable and environmentally compatible measures that achieve decarbonisation and climate resilience by 2050.” Prof FitzGerald added.

“A dialogue of blame for emissions is not an appropriate approach and does not foster cooperation,” the review warns.

“People want to change,” he believed, “but it must also be profitable for them to tackle climate change.” Any negative impacts of the carbon tax on the poorest households can and should be offset by effective use of the carbon tax revenue, he said.

The increase in carbon tax was required to address impacts from the fall in fossil fuel prices over the past year, which would otherwise lead to an increase in emissions.

Enviornmental Protection Agency (EPA) director general Laura Burke, a council member, said “moving from planning to action” would be critical to reducing emissions. Their review came with caveats; demanding targets were realisable “with full implementation of measures and delivery of emissions reductions”.

The reality was the State’s overall emissions were not reducing and it was relying on “one-offs” such as reduced coal and peat usage in 2018 and Covid-19 this year, when there was “a need to move into action in all sectors”.

Another council member Prof Frank Convery said it necessitated incentives, investment, policy and regulations “pushing together in the same direction”, rather than, for example, only using one policy instrument in the electrification of transport – subsidising electric vehicles (EVs).

The review says the current approach “relies too heavily on rapid deployment of EVs, which depends on favourable developments in the private car market. “This could impose a relatively high burden on the Exchequer. Incentives for EVs need to be better targeted towards those with high mileage including commercial and rural drivers. These should be supplemented by disincentives for petrol and diesel vehicles.”

The Government, it says, should urgently focus on eliminating the most carbon-intensive fuels, coal and peat, from space and water heating in homes and other buildings, recognising the “significant negative health impacts of these fuels”.

Government supports for retrofitting must be prioritised first to vulnerable households, and then to households and buildings where emissions are highest; those using coal, peat and oil, which are often in rural areas, it adds.

The Council emphasises that without public acceptance, ambitious climate action will fail. “Citizen engagement is crucial to support increased ambition. “To better prepare for current and future climate extremes, Ireland must implement already identified priority measures at both national and local level.”

While the council endorses the thrust of the Programme for Government on climate action, it highlights its weakness on adaptation, ie in building resilience in the face of climate disruption; in particular the threat to Irish cities due to rising sea levels this century.

Prof Robert Devoy, a member of the council’s adaptation committee, said at an online briefing people could do a lot themselves in embracing climate action but this had to be backed by empowering local communities.

There was a need, however, for large-scale funding from government to build coastal defences, notably to provide sea barrages to protect coastal cities. “Deferring that will not help,” he added.

The Council urges setting a separate 2050 target for significant reductions in biogenic methane emissions, consistent with the objective of carbon neutrality and the Paris Agreement. “Ireland should grasp the opportunity to adapt the reformed CAP as a key instrument for tackling climate change,” Prof FitzGerald said.