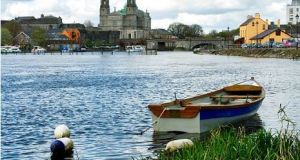 The River Shannon at Athlone: With only half of all Irish rivers and lakes deemed to be in a healthy state, environmental groups have called for a more robust approach to stopping water pollution and to preventing deterioration in pristine waters.

With only half of all Irish rivers and lakes deemed to be in a healthy state, environmental groups have called for a more robust approach to stopping water pollution and to preventing deterioration in pristine waters.

The calls were led on Thursday by the Sustainable Water Alliance (SWAN) - a collective of environmental groups - in response to EPA’s Water Quality in Ireland report.

The report for the 2010 to 2015 period shows the number of river locations with pure clean water has fallen from 500 sites in the late 1980s to 21 locations today.

Raw sewage is being discharged into water at over 40 locations around the country. These include 11 areas in Cork and Donegal, five locations in Clare and Galway, and four locations in Wexford, the EPA has confirmed.

“The very stark findings show the system in place is not working,” said SWAN co-ordinator Sinead O’Brien, “Half of our rivers and lakes and three quarters of our estuaries are unhealthy, based on mandatory standards in the EU Water Framework Directive [WFD].”

Green Party Leader Eamon Ryan said “the report confirms the ongoing decline of pristine water quality areas, which is one of the great environmental failings of our time”.

Friends of the Earth (FoE) criticised the timing of the EPA report as a consultation period closed on Thursday for the “Draft River Basin Management Plan”, which is supposed to be the critical document setting out how Ireland’s waters will be managed for the next three years.

In its actions section, the plan merely set out “everything done already”, Ms O’Brien said. There was no new measures for agriculture and urban waste water, the main pollution sources. It also relies on nitrate regulations that had not worked, she added.

There were blanket regulations applying all over the country when what was needed was “the right measures in the right places”. It meant working with landowners in 46 river catchments, and introducing changes in land practice. Some farmers would have to put out less nutrients on farmland, while there were areas in the country where there should not be any forestry.

FoE director Oisín Coghlan said it was alarming that the plan was approaching an “unacceptable situation with such a low level of ambition”. It must “set out new management actions which will restore good quality to far more than 10 per cent of all the unhealthy waterbodies identified in the draft Plan”, he added.

Given that people respect the EPA and its analysis, the report should have been published two or three months ago to encourage and inform public participation in WFD process and in making submissions, Mr Coghlan said.

IFA environment committee chairman Thomas Cooney called on the Government to implement the EPA’s recommendation to put in place necessary resources to arrest any further deterioration of water status and to make necessary improvements.

“While urban areas account for the least use of land in the country, they continue to have a disproportionately negative impact on water quality,” he said. “There are 124 urban areas where improvements are required to address the adverse effects of waste water discharges, with 43 locations where waste water is being discharged and receiving little or no treatment at all.

“The disposal of raw sewage into our waters must stop,” Mr Cooney added.

On agriculture, the IFA had made a submission to Government calling for additional resources to deliver a range of water quality enhancement measures.

A new national land use plan is needed, the Green Party leader said. “We have to move away from the current intensive farming model and adopt ‘high nature value’ agriculture instead. This had to benefit the farmer as well as the environment.”

Mr Ryan added: “We must also stop the inappropriate spread of manures from farming and the run-off of sewage from leaking septic tanks and faulty sewage systems. We need to match such an approach with an end to the destruction of our bogs and the clear felling of forestry, both of which are silting of our rivers and lakes.”

Restoration of rivers and lakes should be a national goal, he said. “The Green movement needs every farmer, forester and land owner on board. We have 70,000km of rivers to look after, we want them to run clean and free of the pollution - as was commonplace only a few decades ago.”