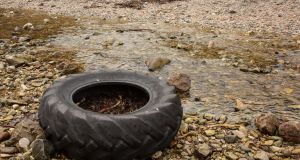 Littering and pollution along the Irish coastline confirm “a new building boom” and the expansion of agriculture throughout the island, according to the results of the annual Coastwatch Survey.

The extent of landfill materials, including construction material, found at a quarter of all 538 shores surveyed and a “widespread increase in nitrate enrichment of fresh water inflows” entering seashores are evidence of this, it says.

Coastwatch says rising nitrate levels are probably due to an increase in cattle numbers and other “man-made sources” such as septic tank systems, fertiliser run-off and improperly treated wastewater.

“The [nitrates] picture for the south and the east coast is worrying,” concludes Coastwatch . At 13 per cent of locations in Northern Ireland nitrate levels were found to exceed a limit set by the EU Nitrates Directive.

The survey results were compiled by volunteers when tides were at low water levels during the autumn and are being analysed by Coastwatch experts working with Trinity College Dublin’s Department of Civil, Structural and Environmental Engineering.

They show 40 per cent of sites “reliably free” of sewage pollution. A figure of 31 per cent of surveyors recorded such pollution “rarely happened”, while 29 per cent reported it was either “occasional”, “frequent” or “usual”. This represents a reduction in sites deemed pollution free last year.

Landfill material was the most frequent source of large waste found. And it appears to be mainly a consequence of demolition or an attempt to ameliorate erosion, said Coastwatch co-ordinator Karin Dubsky.

Tyres were the next most frequent large litter nuisance, recorded in 20 per cent of survey sites. At some locations clusters of waste tyres were set in long lines and being used as traps to capture peeler crabs.

There were just over 8,800 plastic drinks bottles counted, spread across 82 per cent of all survey sites, averaging at 18 bottles per 500m of shore. While this was among the lowest counts in Ireland since 1991, it is still much higher than in countries which have a deposit-return system for empty drinks containers, said Ms Dubsky.

Bottle tops have, however, shown their fourth successive count increase, with a noticeable increase in “complex caps” used with sports drinks.

Plastic shopping bags were found in 40 per cent of survey sites, with almost 1,000 counted. Since the bag tax was introduced in 2002, the count has dropped from a peak of 18 bags per site in 2004 to two bags per site.

The Coastwatch team inspected 170 locations after Storm Ophelia hit Ireland on October 16th. They found “pockets of destruction” concentrated along the south and east coast. The storm had dramatic effects on the coastline: some locations “were wiped clean and indeed all sediment removed down to bare rock”, while others “were stuffed with sediment, marine life and litter”.

The storm caused widespread erosion and deposition. Significant dune loss was recorded in several designated habitats along the east coast – known as Natura 2000 sites. These included sites in Wexford and Wicklow such as Curracloe, the Raven and Kilpatrick dunes.

The storm was well flagged by Met Éireann but also predicted by nature, said Rory Keatinge of Coastwatch. Large clusters of Portuguese Man of War jellyfish were washed up on shorelines along the south and east coast in the days before the storm at locations shown to have been worst affected. Moreover, an unusual high number of live octopuses appeared at the tideline.

Waste thrown up by the sea had high volumes of polystyrene and micro litter (tiny pieces of plastic including microbeads). Bottles and lids were concentrated in some areas “as though a marine hoard had been emptied”.