Dublin’s problem is lack of housing, not unfinished developments 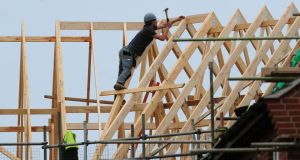 Last year 11,016 housing units were built in Ireland, a lower figure than in the year records began, 1970, when 13,887 houses were built. Photograph: Rui Vieira/PA Wire.

Residential construction reached its nosebleed-inducing height in 2006, when 93,419 houses and apartments were built across the State. It plummeted to its lowest level since records began, 8,301 homes, in 2013.

Things improved a little last year: 11,016 units were completed, but before the party hats and streamers are produced, this figure is lower than the number of homes built the year records began, 1970, when 13,887 houses were built.

At around the midpoint of the plunge, in 2010, the then government produced its first report on the phenomenon of ghost estates, or the less catchy term it prefers, unfinished housing developments. There were at the time 23,250 vacant houses and apartments in almost 3,000 unfinished estates.

It might seem unfathomable that, when there was such a glut of houses lying idle and half-built littering the countryside and making the place look untidy, just over four years on the State would be experiencing a housing shortage that has the moniker, every time it is mentioned, of “crisis”.

The 8,000-odd houses built across the State in 2013, at the bottom of the residential construction market, is about the same number the Government estimates needs to be built each year in Dublin alone.

According to the Housing Agency, about half the new homes needed nationally each year for the foreseeable future need to be built in Dublin

Dublin, particularly urban Dublin, never really had much of a problem with ghost estates, and now, according to the Government’s most recent unfinished developments report from last December, there are just 10 unfinished estates in Dublin city, most on the fringes where city meets county. In comparison there are 130 ghost estates remaining in Cork county and 64 in Donegal.

However, Dublin did have perhaps the most notorious ghost estate of all in Priory Hall. The north Dublin apartment complex, built in 2007 by former IRA hunger-striker Tom McFeely, was evacuated by order of the High Court almost four years ago after it was found to be a fire trap.

Following a lengthy legal process, the residents had the mortgages on their useless homes written off and the estate is currently being rebuilt by Dublin City Council at a cost of €27 million.

If anything positive came out of the Priory Hall debacle – and that is a massive if, given the personal tragedy and colossal waste of money that surrounds that defining episode in the sorry history of the property crash – it has been a greater focus on the quality of construction in new developments.

The then minister for the environment, Phil Hogan, said their introduction would end “light-touch regulation” by stopping the self-certification that allowed developers to declare their work met building standards.

But many argued that the system was still one of self-certification as the assigned certifier, the architect or engineer who signed off at the end of the build, could be one of the developer’s employees and there was no requirement for local authorities to visit the site.

Whatever level of protection the requirement gives home buyers, it will be reduced from tomorrow, when an exemption for builders of one-off homes comes into force.

Minister for the Environment Alan Kelly, concerned with what he said were “outlandish charges” being sought for inspections required under the new system, decided to remove the mandatory requirement for statutory certificates of compliance for “a new dwelling on a single unit development or a domestic extension”.

It might seem reasonable to exempt a single house from an onerous and expensive compliance regime; after all it’s probably being built for the person who will be occupying it.

However, in the first six months of this year almost half of all homes built, 48 per cent, were one-off houses, and presumably a proportion of these will eventually be sold on to third party, who might have reasonable expectations that their home would be safe.