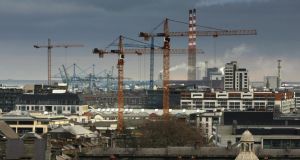 Developers planning to build large-scale housing schemes will be able from Monday to make their case directly to An Bord Pleanála, bypassing local-authority decision-making processes.

Applications for developments of more than 100 homes, or blocks of 200 student bedspaces, made this week could secure planning permission before the end of the year under the new fast-track scheme.

The Strategic Housing Development system gives effect to the commitment made under Rebuilding Ireland in July 2015 to “fast-track” decision-making for large-scale housing and student accommodation schemes.

Instead of developers applying to their local authority, whose decisions could then be appealed to An Bord Pleanála, applications for large developments would be made directly to the board.

The board will be required to hold pre-application consultations with developers and the relevant local authority for a maximum period of nine weeks, prior to the submission of an application. It will then have up to 16 weeks to decide whether to grant permission, during which time the public, councillors and the local authority could make submissions.

The fast-track provision will be in place for three years with a possible two-year extension if the housing crisis continues.

An Bord Pleanála has established a 10-strong team, including six planners, to deal with the applications and expects to receive a number of requests to start the pre-application process in the coming days, with several developers believed to have put off making applications to local authorities in anticipation of the new system.

“Setting up the fast-track planning system has taken such a long time that there are a number of projects that could already be in development but have been waiting. It has had a huge effect on the market that these have been held back.”

In his practice alone, five schemes are ready to be submitted to the pre-application process. “These five are ready to start negotiations now. There was one more but they got fed up waiting and went into the local authority system .”

A spokesman for the Irish Planning Institute said he was aware of a number of developers who had made recent submissions to local authorities for large housing developments to avoid using the new process.

The maximum fee which could be charged by a local authority to process an application was €38,000, while fees under the new system can reach €80,000.