February was mild and dry despite Storm Doris 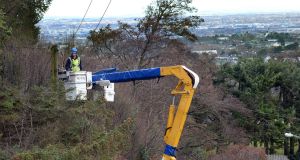 Although the month ended with Storm Doris, February’s weather was generally mild and drier than normal in some places, according to the latest Met Éireann weather statistics.

The month opened with a deep depression on February 2nd that brought rain and strong winds countrywide.

The rest of the first week remained cold and showery, with some sharp night frosts.

A blocking area of high pressure over Scandinavia allowed a southeasterly airflow to influence Ireland during the second week of February, bringing a lot of dry, albeit breezy, weather.

The third week was unsettled, as a predominantly southwesterly airstream brought successive fronts in from the Atlantic. The north and west were hit by particularly heavy rain on the 21st.

In the final week of the month, a shallow trough in the mid-Atlantic rapidly deepened and became Storm Doris, which crossed the north of the country and brought widespread gales on the 23rd.

Just in excess of half of weather stations reported monthly rainfall totals that were below average, with parts of the south, southwest, west, midlands and Dublin reporting above average totals.

The number of wet days ranged from 10 at Dunsany, Co Meath, to 23 at Valentia Observatory, Co Kerry.

The month’s wettest day was recorded at Newport, Co Mayo, which saw 27.8mm of rain on the 21st.

All mean air temperatures across the country were above average for the month, with one-fifth of stations reporting differences from the average in excess of 1 degree Celsius.

Nearly all stations reported the month as the mildest February in five years.

The month’s highest temperature was reported at Roche’s Point, Co Cork, on the 20th, which recorded a temperature of 14.9 degrees Celsius, its highest for February since 2005.

Cork Airport reported a highest maximum temperature of 14.5 degrees on the same date, the highest for its weather station during February since the airport opened in 1961.

Both the month’s lowest air and grass minimum temperatures were recorded on February 5th at Mullingar, Co Westmeath.

The highest number of daily sunshine hours was eight hours, which was recorded at Valentia Observatory on the 11th.

The number of dull days ranged from five at Malin Head, Co Donegal, to 16 at Knock Airport.

Both the month’s highest gust and the highest 10-minute mean wind speed were reported at Mace Head, Co Galway, during Storm Doris.

1 Coronavirus: Donnelly ‘cautiously optimistic’ about Dublin
2 Man with electric scooter who died in Meath was due to get married in the coming weeks
3 Hospitality industry suffers another blow as New Year’s Eve festival is cancelled
4 ‘Entirely wrong’ to remove pandemic payment from students, says Sinn Féin leader
5 Hundreds of thousands in China given ‘emergency’ Covid-19 vaccine
Real news has value SUBSCRIBE