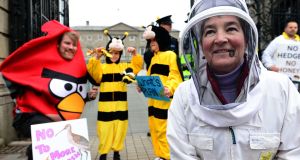 Loretta Neary, of the South Kildare Beekeepers Assoc, with Fintan Kelly, of An Taisce, protest outside Leinster House over the proposed changes to the Heritage Bill. Photograph: Dara Mac Dónaill

Environmental groups from across the State have called on the Seanad to drop proposed changes to the Heritage Bill which they say ignore science and would equate a death sentence for a number of wildlife species.

Representatives from BirdWatch Ireland, the Federation of Irish Beekeepers’ Associations, the Hedge Laying Association of Ireland, the Irish Wildlife Trust and An Taisce gathered outside Leinster House on Thursday to protest against the Heritage Bill which was being debated in the Seanad.

If the proposed changes to section 8 of the Bill are passed, hedgerow cutting and gorse burning dates will be extended to run from August to March.

Those opposed to the changes warn that while the proposed legislation will provide farmers with an additional month of farming, the move will negatively affect the bird-breeding season.

They said the Government was “attempting to weaken the laws” that protect breeding birds and other biodiversity, while on the other hand lauding “the greenness of our agriculture”.

Kieran Flood from the Irish Wildlife Trust warned that the changes to the Bill could be “extremely damaging to Ireland’s wildlife”, in particular to species already at risk.

“Some species of birds will still be nesting in August and could by physically destroyed by the cutting,” he told The Irish Times. “ The cutting would also be detrimental in August to other birds, bats and bees who are still using the hedgerows for their wildflowers and fruit. The other damage would be the removal of a food source from species that are already in decline.”

A statement from Birdwatch Ireland highlighted how August is the time of year when “our hedgerows are full of berries and other foods that birds, bees, butterflies, and other wildlife depend on”.

It added that certain bird species, such as the threatened and red-listed yellowhammer which nests in hedgerows, still have chicks in their nests at that time of year.

Oonagh Duggan from BirdWatch Ireland joined her colleagues in calling for the Seanad to reject section 8 of the Heritage Bill on the basis that “it ignores the science which says that it could seriously impact on nesting birds and could be the death knell for some species already in trouble”.

She added that the changes could also affect the Irish bee population who need all the help they can get.

“If this Bill is passed it will send a clear message that Ireland is not serious about protecting its natural heritage for generations to come,” said Ms Duggan.

However, a statement from the Irish Farmers’ Association (IFA) said the measures proposed in the Bill would facilitate better land management.

IFA environment chairman Thomas Cooney encouraged Senators to support the Bill which he said provided “a pragmatic approach to addressing issues such as overgrown hedges impacting on roads and vegetation management, while ensuring the protection of biodiversity”.