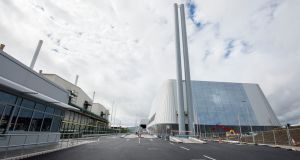 The incinerator at Poolbeg, Ringsend where 11 were hospitalised following an incident at the incinerator. Photograph: Brenda Fitzsimons / THE IRISH TIMES

Dublin City Council has asked for a full safety audit on the operation of the Poolbeg incinerator after 11 staff were hospitalised last week following a small leakage of lime.

The council has also requested a report on why Covanta Ireland, the company that operates the incinerator in Ringsend issued “no immediate information to the public, public representatives or indeed the Community Liaison Committee following the incident”.

A number of motions were passed by the Council in relation to the incinerator at its monthly meeting on Monday evening at City Hall. These included that all works cease until an independent investigation is carried out and that the processing of waste will not resume until the Health and Safety Authority and the Environmental Protection Agency are satisfied.

Three separate investigations by the HSA, the EPA and Covanta are currently underway after a small amount of lime, which is used to trap pollutants, was released inside the flue gas treatment area at the incinerator last Wednesday night. Labour councillor Dermot Lacey said “It’s a lousy start to a lousy project”. “I still haven’t been contacted by Covanta and yet I’m a member of the Community Liaison Committee.

“I got some emails from the [Dublin City Council] manager that gave me some information, I don’t know the time frame, I don’t know what happened, how it happened or what’s going to happen in the future. One thing we need to do is secure proper public information.”

Green Party councillor Ciaran Cuffe said it took 12 hours for the council to be informed of the incident. “I think there are lessons to be learnt . . . I think we need real time information about what’s happening in the plant and about the emissions from the plant,” Cllr Cuffe said.

Sinn Féin councillor Chris Andrews said the incident was “a huge shock for individuals” and that “it seemed residents were right” in relation to concerns raised prior to its opening.

Independent councillor Ruairi McGinley said while it was a “serious incidence”, “rather than blowing hot air” the council needed to leave the HSA and EPA to their investigations.

A spokesman for Covanta said it was satisfied the source of the leak was a door seal that was “not properly fitted”. He said commissioning and burning would not resume until all current identified issues were “resolved to the satisfaction of all involved”. The company’s own investigation would provide a “good level of transparency” on what happened, he added. The plant was first proposed in 1997 but did not secure planning permission until 2007.

An Bord Pleanála received about 2,500 objections to the application for permission, including one from former Green Party minister for the environment John Gormley. Construction of the plant began in 2014 and took about three years to complete. The incinerator took its first deliveries on April 24th.