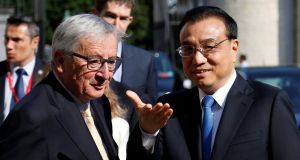 China, the world’s largest polluter, has given enthusiastic support to the Paris climate agreement after President Donald Trump announced the US withdrawal from the pact, burnishing Beijing’s credentials as a global champion against global warming.

With a series of tweets, Mr Trump had widely flagged his decision to pull out of the 2015 Paris climate change accord that seeks to limit the rise in global temperatures to less than two degrees Celsius by the end of the century, allowing China to nimbly step in with a message that Chinese media said had “largely comforted the world”.

“China will stand by its responsibilities on climate change,” said Premier Li Keqiang, who was in Berlin and Brussels to meet Chancellor Angela Merkel and take part in the 19th EU-China summit.

“With tremendous effort, China will continue to implement promises made in the Paris Agreement, to move toward the 2030 goal step by step steadfastly,” said Mr Li.

A similar message came from the foreign ministry in Beijing, although neither mentioned Mr Trump specifically in their remarks.

China overtook the United States as the world’s biggest emitter of greenhouse gases in 2007 and environmental problems are becoming a threat to stability as its cities choke on smog and pollution destroys its rivers.

The country has made some efforts to introduce renewable resources, and coal consumption fell for the third year in a row in 2016, partially due to the slowing expansion of the economy, while one-fifth of its energy needs now come from renewable resources.

Mr Trump’s decision to quit the Paris accord will give a considerable boost to China’s efforts to secure greater global influence.

China’s reputation was already riding high after President Xi Jinping unveiled a giant infrastructure plan and pushed for more free trade in the face of growing US protectionism.

In Brussels, the China-EU leaders’ meeting produced the first joint communiqué on the environment. The statement committed to cutting back on fossil fuels, developing more green technology and raising €89 billion a year by 2020 to help less well-off countries cut their emissions.

The headline on the Xinhua web site was “US quitting Paris climate deal leaves world shaking its head” while the Global Times, a bellwether for popular opinion in China, said leaving the accord highlighted the US’s “selfishness and irresponsibility”, which would seriously damage the US’s world leadership.

“The attitude toward the Paris deal is not related to geopolitics. China is not interested in discussions about the leadership of fighting climate change,” said the paper, which is published by the same house that produces the Communist Party official organ, People’s Daily.

“No matter how the US deals with the issue, China should focus on its own efforts to realise its promises to peak carbon emissions before 2030,” the Global Times said.

Greenpeace East Asia senior global policy officer Li Shuo said Mr Trump’s decision took his administration in the opposite direction to the rest of the world.

“While China cancels coal power plants, Trump cancels climate action,” said Mr Li. “Trump’s attempt to sabotage the global transition to a safer clean energy future won’t succeed. It will only corner the US and present China with an opportunity to reap the economic benefits of America’s withdrawal.”