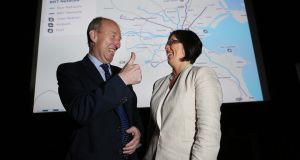 Moving commuters out of their cars and onto buses is the driving principle behind the National Transport Authority’s €1 billion revamp of Dublin Bus services.

The authority wants to increase the number of bus passengers by 50 per cent to almost 190 million journeys annually over the next seven or so years. Commuters with access to trains and trams are unlikely to switch to buses, however enticing the promises of improved journey times and reliability are – the target market here is definitely the private car.

Speaking at the unveiling of the plans, NTA chief executive Anne Graham said car journeys in Dublin were on average 13 per cent slower in 2016 than in 2015. On the M50, which she described as the “barometer” of the city’s traffic, vehicle numbers had increased by 18 per cent in the 2014-2016 period and the journey time on the busiest stretch, the M1 to the N3 junction, had tripled over the same interval.

In case the message wasn’t 100 per cent clear, Minister for Transport Shane Ross hammered it home: “We have all suffered from growing congestion in Dublin and people’s everyday journeys are becoming more and more difficult . . . This project will get people out of their cars, reduce emissions and make cycling more attractive for all.”

But as well as capturing new customers, the buses need the road space currently being occupied by cars. The 17 routes the NTA plans to upgrade have bus lanes along 30 per cent of their length – the authority wants to increase this to effectively 100 per cent, delivering “end-to-end priority”, and it wants to introduce cycle lanes which will be separate from bus lanes, another demand on limited road space.

“Obviously if you want to get a higher level of priority along those corridors there may have to be changes to the arrangement of the car lanes,” Graham said. When asked if this meant removing traffic lanes in some instances, this was “certainly a possibility” she noted.

The sweetener is that journey times will become faster, more reliable, and more predictable. The catch is this only works if motorists get off the road.