Crude overfishing means the world is no longer oysters’ 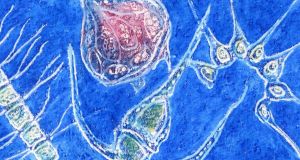 A modest object among the beach-combed bric-a-brac that litters too many of our windowsills is half a pale oyster shell, a shallow, oval cup with many ridges or growth-rings, all greatly worn by tumbling tides. The shell’s surface, inside and out, is scattered with embossed white curlicues, homes of tiny serpulid tube worms.

They built the tubes in calcium carbonate, much the same compound as their oyster host extracted from the sea, with its carbon dioxide dissolved from the sky. The whole shell, in the hand, has the dense weight of marble, like a fragment of ancient statuary.

It is the cupped half of a native flat oyster, Ostrea edulis, whose populations once covered much of Europe’s – and Ireland’s – sheltered bays and estuaries. Raising flat lids to filter plankton from the water, they made the algal blooms of today’s “red tides” a rarity.

Their great reefs, built up through generations, were loaded with mussels, sponges and seaweeds and teeming with baby fish. The oysters themselves fed masses of the poor, and their shells can still be dug from around the ruined cabins of the Famine.

Today, the native reefs have vanished and what is left of Ostrea edulis is threatened or declining. Europe has only about 20 productive sites and Scotland has just reintroduced the oyster after virtual extinction a century ago. The last Irish stocks, still fished under tight control, are in half-a-dozen bays in special areas of conservation.

The native oyster’s history tells both of a great loss from the coast’s ecosystem and a sad result of trying to go one better.

At Mayo’s Clew Bay, in the late 1800s, some six million native oysters a year were dredged for export to Britain, where well over a billion were being eaten. On Ireland’s east coast, where oyster beds stretched for 50km, Arklow was shipping up to 30 million – nearly 3,000 tons – a year. Today the annual national harvest of natives is no more than 300 tons.

Clew Bay’s last scattered clumps now total less than 50 tons, true also of Galway, Kilkieran and Blacksod bays. Most of the national stock is in Tralee Bay, where the oysters cluster, in the inner bay, at up to 50sq m.

The long and crude overfishing with dredges devastated their togetherness and thus their reproduction. As the natural and “public” reefs disappeared, oyster farming took over. Much later, in the 1980s, an illegal importation of spat from France brought a disease, Bonamia, to devastate native stocks.

The Pacific cupped oyster, Crassostrea gigas, imported from Japan to Europe in the 1970s, was not only bigger, juicier and disease-proof, but has a more accommodating sex life. Ostrea edulis keeps changing its sex and the female needs sperm from a neighbouring male. It nurses its early embryos inside, on her gills (which makes this oyster inedible in months without an “r”).

Pacific oysters spawn both sperm and eggs liberally into the sea. They combine to generate larvae, for collecting and growing on to adulthood, first in warm-water tanks, then in mesh bags perched on trestles in the shallows. Production now stands at more than 9,000 tons, sold mainly to France.

Tests originally suggested that the new oyster would not breed successfully in Ireland’s cool waters. As the Atlantic warms, its prolific spawning has turned it into yet another invasive alien. Researchers at UCD found “feral” populations, genetically independent of oyster farms, in 18 locations, most densely in Lough Swilly and Lough Foyle, but also in the Shannon Estuary and Galway Bay.

Crassostrea can form dense reefs of its own, reportedly of twisted shells of low commercial value. It also changes the life of tidal ecosystems, smothering keystone species and any native flat oysters. The UCD team has urged tighter control of wild Pacific oysters and use of “triploid”, infertile stocks. Meanwhile, Ireland’s farmed shellfish face threats from human abuse of the sea. This month, the Marine Institute hosted an international conference on shellfish safety, secure in its own good record of monitoring and predicting algal blooms.

Some plankton species in these commonly termed “red tides” feed toxins into shellfish that can make human consumers very ill.

Speaking at the conference was Dr Don Anderson, the American expert on the phytoplankton Alexandrium. This toxic dinoflagellate, which tries to paralyse human breathing, has cost New England’s shellfish industry millions of dollars in precautionary closures. It also heads the list of Ireland’s harmful algal blooms, occurring typically from June to July.

The nutrient loading of coastal pollution, along with global warming, promotes these algal blooms.

And now it’s reckoned that pieces of plastic will soon outnumber fish in the ocean (the hopeful theme of World Oceans Day, next Thursday, is clearing plastic from the shores).

Oysters are eating their global share of tiny microplastic fragments, damaging more than their digestions and fertility (whatever about our own).