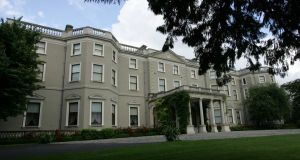 Almost €35,000 has been spent on pest-control services at Farmleigh House to combat the presence of rats, wasps, ants and carpet moths during the past five years.

The State-owned guest house required the services of pest-control specialists on 27 occasions over the period.

During one inspection in 2015, rats were observed eating through alarm wires at the Georgian mansion; a rat was also spotted in the boathouse cafe at Farmleigh the same year.

Evidence of rat activity was detected on 18 of the 27 inspections carried out by the pest-control firm, according to records released under the Freedom of Information Act.

Farmleigh House was purchased by the Government for €29 million in 1999 for use as an official guest house. A further €23 million was spent refurbishing the 18th century building.

It contains six reception rooms, 14 bathrooms, a ballroom, and a library; a theatre, gallery, cafe, and boathouse are also located on the surrounding 78-acre estate.

Last year the pest-control company was called to deal with a problem involving carpet moths in an office area of the house, which required a fumigation treatment to be carried out in a number of rooms.

In July 2015 a spray treatment against garden ants had to be carried out by a service specialist in three duct areas and in a number of meeting rooms, according to inspection reports.

A total of €33,180 was spent on pest control at Farmleigh House between 2012 and 2017 by the Office of Public Works, which is responsible for the maintenance and management of the building.

A spokesperson for the OPW said it did not wish to comment in relation to this matter.