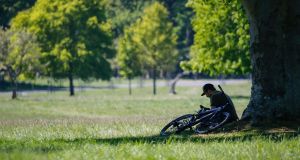 Relaxing in Phoenix Park as thousands seek to ban through-traffic on Chesterfield Avenue. Photograph: by Crispin Rodwell for the Irish Times

Thousands of people have signed an online petition, set up on Thursday night, calling for the end of the use of Dublin’s Phoenix Park as a throughway for motorists.

The Office of Public Works (OPW) will on Monday reopen the main car parks in the Phoenix Park, which have been closed since March.

However, they will be open only from 10am daily to encourage their use for “recreational users” only, and parking along Chesterfield Avenue will remain prohibited. Access to the park will remain available only to those living within 5km, in line with Covid-19 restrictions.

Since March, cars have been banned from parking in the park, and most roads there have closed to traffic with only the Park Gate Street and Castleknock gates open.

Gardaí have been on duty at both ends of Chesterfield Avenue - the linear road between the two gates - asking motorists their destination and turning back vehicles where there was non-compliance with the Covid-19 movement restrictions.

Gardaí and park rangers have also been patrolling the park to move on any motorists breaking the new rules.

From May 18th, car parks will open from 10am daily, although “dedicated parking areas” will be provided for those taking early morning exercise on the upper Glen Road, and the Phoenix Park Visitor Centre Walled Garden will be used for “cocooning space”from 10am to 1pm daily.

However, parking will remain banned on Chesterfield Avenue, and instead the hard shoulder, heavily used by parking commuters, will become cycle lanes and the existing cycle lanes on the avenue will be used for footpaths.

From June 8th, the perimeter gates, that are currently closed, will reopen to traffic. Parking on the grass or footpaths has always been prohibited, and remains so.

A Green Party petition, initiated on Thursday evening by city councillor Michael Pidgeon, is calling for an end to the use of the park as a throughway for motorists.

Drivers would still be allowed to use the park’s car parks for visiting attractions such as the Zoo, he proposes, but would be prohibited from using it as a “short cut” to get from one part of the city to another.

“The Phoenix Park is a destination - not a shortcut. The past weeks have shown just how important the park is - and how much better it is without heavy car traffic. It’s calmer, quieter, safer and cleaner. Fewer cars have meant more people,” he said.

“We want to see an end to motorised through traffic. This would still allow motor access to park facilities and institutions, but would end the use of the park as a road to get from one side to the other. This could be achieved easily with bollards or rule changes, while ensuring that people can still access the park - regardless of age or ability.”

Mr Pidgeon said the OPW’s decision to turn the hard shoulder on Chesterfield Avenue into a cycle lane, stopping parking along this road was a “point of light” and he hoped it would be retained after the Covid-19 restrictions were lifted.

The OPW said, on the advice of Gardaí, Chesterfield Avenue, was being kept open for emergency services, essential workers and access for workers within the Park.