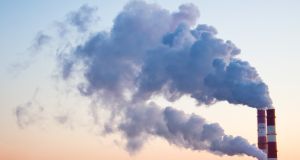 A nationally representative sample of 1,200 adults were asked whether they agree or disagree with five statements about climate change.

Today’s Irish Times/Ipsos MRBI poll results show that the majority of Irish adults (55 per cent) agree that “climate change is the most serious issue facing the world” and that just over one-third (36 per cent) disagree.

Fieldwork for today’s Irish Times/Ipsos MRBI poll took place between Friday and Sunday of last week, after days of climate-change protests in Dublin city centre and across the world.

Our poll findings show that agreement with the statement, “climate change is the most serious issue facing the world” is highest among 18- to 24-year-olds and the AB socio-economic grouping at 65 per cent and those living in Dublin at 64 per cent.

A similar pattern is evident throughout the poll results, with these demographic groups claiming to take the climate-change issue seriously and to be willing to make sacrifices to tackle it.

Farmers are least likely to agree with the statement at 38 per cent, a level considerably below that recorded for any other demographic grouping.

To provide some contrast, our poll measured agreement and disagreement with the statement, “I don’t think climate change will be as bad as some people say so I’m not that worried about it.” One-third of Irish adults agreed with this statement, with agreement highest among farmers at 50 per cent.

Interestingly, 21 per cent of those who agree that “climate change is the most serious issue facing the world” also agree with the statement, “I don’t think climate change will be as bad as some people say so I’m not that worried about it”.

This is not necessarily a contradiction; one could perhaps reasonably believe climate change is the most serious issue facing the world and also believe it won’t be as bad as predicted. If anything, this result serves as reminder of the nuances of the climate-change debate.

Positively, the data suggests that people are willing to make sacrifices to tackle climate change, the majority (54 per cent) agree with the statement, “I am okay with reducing my standard of living in order to help tackle climate change”. However, a not insignificant 36 per cent of the population disagree.

Agreement with this statement is highest among the AB socio-economic grouping at 70 per cent, with disagreement highest among farmers at 53 per cent.

Devil in the demographics

A much closer result emerges when it comes to the statement, “I am okay with the price of oil, gas, petrol and diesel increasing to help tackle climate change”, 44 per cent agree with this statement and 48 per cent disagree.

The majority (56 per cent) disagree with the statement, “the Government should spend more money on tackling climate change and less money on public services”; just over one in four agree (26 per cent).

While the seriousness of climate change is widely acknowledged, there appears to be some way to go before all of the sacrifices that may be required to tackle it are widely accepted.