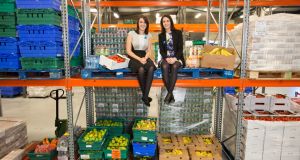 Efforts to halve food waste in Ireland over the next decade have been boosted by the production of six short films outlining how redistribution of quality food benefits communities and reduces greenhouse gas emissions.

The “case study videos”, which are available online, are part of an initiative by the not-for profit social enterprise FoodCloud, in partnership with food industry, charity partners and the Environmental Protection Agency (EPA).

FoodCloud is currently working with more than 150 food donation partners to provide 650 charities with access to “perfectly good food that might otherwise go to waste”. With their latest initiative, they have called on Irish manufacturers, suppliers, and farmers to join the growing number of partners in donating their surplus food to charities.

Some 30 per cent of food produced for human consumption is lost or wasted across the global food system, amounting to approximately 1.3 billion tonnes per year and causing 8 per cent of global carbon emissions.

FoodCloud chief executive Iseult Ward said the problem of surplus food is one that almost every Irish food manufacturer and retailer has to face, as it is impossible to match the supply and demand of food, but it “provides an environmentally sensitive, socially responsible and economically viable alternative to food disposal”.

The films feature supermarkets including Tesco, Lidl and Aldi and food producers such as Nestlé Ireland, Arrabawn Dairies, Hilton Foods and Meade Potato Company. They highlight the impact they have made on local communities by collaborating with FoodCloud “and how rewarding the process of food redistribution can be,” she said.

Speaking at the EPA Food Waste Forum, where the films were premiered Minister for Climate Action and Environment Richard Bruton said more than 1 million tonnes of food was wasted every year in Ireland; about 70 per cent of this came from industry, costing Irish business over €2 billion annually.

“Delivering on this ambition will require a collaborative effort from Government, enterprise, the EPA and pioneers such as FoodCloud who are leading the change,” he added.

EPA programme manager Mary Frances Rochford said preventing food waste is “a way that we can all respond to climate change”.

To date, FoodCloud have redistributed over 19 million meals, an estimated food value of €24 million. The savings made on food bills allow its charity partners to reallocate resources back into core services.

FoodCloud co-founder Aoibheann O’Brien said: “The initiative showcases how national and international businesses are working alongside their local charities, creating global action at a local level and we hope that we can inspire all players to get involved.”