Dandelions a marvel of exquisite engineering 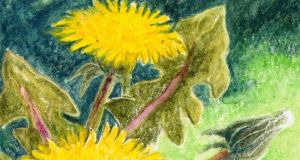 More than 70 different forms of dandelion have been recorded so far in Co Dublin alone.

They are mostly lying low just now, the lion’s teeth lobes of their leaves (dent-de-lion) perhaps a bit blunted after the long, hot summer. September is for storing food in their roots, but some of the plants long settled and ignored will light up in flower a second time and even go on to open their feathery globes of seed.

Dandelions came to mind from learning that Dublin councils are testing alternatives to glyphosate as the standard weedkiller for roadsides, parks and playgrounds.

Finally alarmed by the court case in the United States, councillors may well be apprehensive of claims by employees linking the spraying of Roundup to risks of cancer. The public, too, will like to hear of the trials of flame-wands, steam-blasts, hot foam and concentrated vinegar as other effective, nontoxic ways to deal with urban weeds.

A relevant Venetian folk name for the dandelion is the oddly-Irish pisacán, or “dog’s piss”, deriving from male dogs lifting a leg against tree or lamp-post

Like the “natural” herbicides now sought in the essential oils of certain plants (native yarrow among them), these alternatives may wither top growth, especially of seedling weeds, but have to reckon with the dandelion’s stubborn resurgence from any good chunk of taproot.

Among Dublin authorities, Dún Laoghaire-Rathdown County Council plans to stop spraying any weedkiller around the bases of trees and walls, the edges of shrubbery, around manholes and traffic signs.

A relevant Venetian folk name for the dandelion is the oddly-Irish pisacán, or “dog’s piss”, deriving from male dogs lifting a leg against tree or lamp-post. But that’s to neglect the French pissenlit and the long reputation of the dandelion as a human diuretic.

In the search for useful medical molecules, research still goes on to analyse the herb’s myriad phytochemicals – tannins, saponins, flavonoids, terpenoids, glycosides. The Irish caisearbhán, meanwhile, speaks merely of the bitterness of leaves.

Taraxacum officinale (the dandelion’s Latin name) is an “official” plant of herbal medicine. But its reproductive policy was once described by ecologist Paul Ehrlich as “perhaps the greatest mystery in the world of plant sex”.

Each glowing cushion of about 100 florets offers abundant nectar, eagerly sought by the first foraging bumblebees and hoverflies of spring. But it provides no pollen for cross-fertilisation and thus never interbreeds. Its seeds are set entirely asexually (they are “apomictic”) and grow as clones of the mother plant.

This lets the environment vary them into a multitude of different forms, or microspecies. The current Webb’s An Irish Flora, bible of Irish botanists, cites more than 70 recorded so far in Co Dublin alone, with many more to come as the island’s county floras are completed. The dandelion, says Webb’s, is “a very difficult genus”, its flowers not always to be told apart, even in the hand.

I am fascinated, meanwhile, by the plant’s exquisite engineering, given form in the seed-head’s lacy globe but all of a piece with invisible wheels, cogs and calculations.

One set of pulleys keeps the plant a proper shape. Each year, as it grows new leaves at the top, the tap-root contracts, perhaps by a quarter of its length, to pull the rosette tight against the earth. This spreads the leaves to fend off crowding grasses, gather the most light and channel every raindrop to the centre and the root.

Another mechanism responds to changes in light, in fine weather stretching its florets to the sun and swivelling the flower-heads to track its path across the sky, or closing the flowers at the approach of rain-dark clouds or dusk.

Once, early in my digging, and still with an urban gardener’s paranoia, I panicked at the sight of so many dandelion seed-globes quivering in the wind. I handed our young daughter a box of matches, with the promise of a penny-a-head reward, to act as arsonist – a reprehensible (if visually quite diverting) spectacle.

With up to 400 seeds per head, but commonly about half that, Taraxacum floats its parachutes on any breeze above 4 mph, and the simple passage of road traffic is enough to distribute it far along the verges. There are weeks in spring when some minor roads of Mayo are densely and beautifully gilded.

My own little crop still lights up odd grassy corners of an overgrown garden. Watching the spring’s first insects arriving at the flowers for nectar (and, once, a goldfinch hovering to pluck at the seed-heads) allows me guilt-free enjoyment of that radiant, joyful spring colour.

The urban world can be different, as a recent article on weed management in the UK journal Horticulture Week reminded: “Weeds growing through the cracks of pavements will also trap litter, attracting rats as they sniff out takeaway food wrappers.” But also: “weeds make the street scene look uncared for and can lower the tone of the neighbourhood, inviting unsocial behaviour, graffiti and vandalism”.

It’s all in the mind.