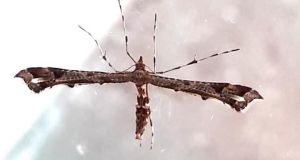 This magnificent flying machine appeared in our kitchen last month. It was quite unlike normal moths.
Martin Berridge, Stillorgan, Co Dublin

I encountered this beautiful green and yellow caterpillar in the Wicklow Mountains. Can you tell me something about it?
Aoife Mac Allister, Bolton Square, Dublin

It’s the caterpillar of the emperor moth. The female flies by night and lays her eggs on heather and various bushes. The male flies by day and can locate a female 2km away.

This caterpillar fell out of a ceanothus bush – probably a lime hawkmoth.
Gordon Knaggs, Sutton, Dublin 13

It’s the caterpillar of the eyed hawkmoth, not unlike that of the lime hawkmoth. The horn on the lime is blue above and yellow and purplish-red below, and on the eyed it is totally blue.

I found this gelatinous sphere on the bottom of a pot of a tomato plant. Is it a slug’s egg?
Deirdre McDermott, Cleggan, Co Galway

It’s the egg of the yellow slug.

This giant slug was well over 10cms long. Is it a predator slug?
Eileen Cameron, Monkstown, Co Dublin

It’s the leopard or tiger slug, which can grow up to 15cms. It eats other slugs as well as decaying plants.

Noel Gallivan reported an abundance of peacock butterflies in the Glen of Aherlow, Co Tipperary. They seem to have been very productive this year. Eye on Nature had a huge clump of peacock caterpillars from Fermanagh in June. This photo was taken on Turbot Island off Clifden, Co Galway by Edward Horgan, Castletroy, Co Limerick.