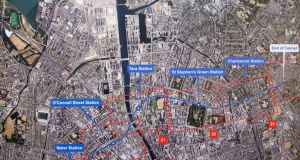 The cost of the Metrolink rail line in Dublin will not be known until the end of this year as a result of changes to the project announced last month, the State body responsible for transport procurement has said.

Aidan Foley, project director of Transport Infrastructure Ireland (TII) on Monday told Dublin city councillors it was not currently possible to say how much the line, which will run from Swords to Charlemont near Ranelagh will cost.

Taoiseach Leo Varadkar in recent days indicated that the cost of the line could rise to €5 billion rather than the €3 billion previously estimated. Mr Varadkar said that if the State could find between €4 billion and €5 billion for the rail project, it could surely find €3 billion for the controversial rural broadband plan.

In March of last year, plans were published for a €3 billion rail line which would run from Swords to Sandyford, serving Dublin Airport and the city centre. However, following strenuous opposition to potential lengthy closures to the Luas Green line during the metro construction, the National Transport Authority (NTA) announced in March that it would shelve the southside section of the line. Instead of continuing to Sandyford, the line would terminate at Charlemont, where it meets the Luas Green line.

The NTA said it would tunnel past the Charlemont stop to allow the conversion of the Luas to metro “to occur at an appropriate point in the future” but the upgrade would not be required “for some time - perhaps 20 years or so”.

City councillors on Monday asked Mr Foley how the cost had increased to a potential €5 billion, and did it furnish Mr Varadkar with those figures.

“Were you aware of that figure or is it the first you have heard of that?” Fianna Fáil councillor Frank Kennedy asked.

Fine Gael councillor Paddy McCartan asked would the cost of the line not be reduced because it would be shorter and as “the construction method was being changed from a double-bored tunnel to a single-bored tunnel”.

Mr Foley said TII was “still in the very early stages of moving out of concept design” for the project.

Councillors also asked if TII or the NTA was working with residents of the College Gate apartment block on Townsend Street, which the transport authorities say needs to be demolished to facilitate the Metrolink project.

Mr Foley said TII had had a number of meetings with the owner occupiers of College Gate, which had been “difficult enough”.

He sait TII was “looking to engage more closely with a view to getting into early negotiations” to make the process “less painful for the residents of those apartments”. However, he said the demolition plan “remains the preferred option”.