What’s this insect I spotted on a hedgerow? Readers’ nature queries 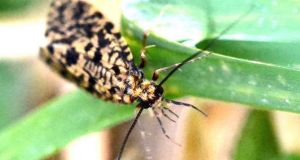 I spotted this little guy on a hedgerow between Ballyshannon and Belleek during the warm spell at the end of March. – Emer O’Shea, Ballyshannon, Co Donegal
It’s a caddis fly, Philopotamus montanus, the yellow-spotted sedge fly, which is found locally all around Ireland near upland streams.

My friends and I spotted this large beetle on the Ballycotton cliffs in Co Cork. It was trying to dig its way into the side of the earthen path. – Lorraine Guerin, Dundrum, Dublin 14
It’s the black oil beetle, and it was laying its eggs in a burrow close to nesting solitary bees. The larvae make their way into a bee’s nest and feed on the food store, eggs and young.

This small blue butterfly visited my garden. It was about half the size of the peacock butterfly. – James Armstrong, Enniskillen, Co Fermanagh
It’s the holly blue butterfly.

My nine-year-old daughter Róise discovered this ladybird on the timber holding up our bird feeder. We were curious about the yellow eggs. – Gráinne Curtin, Cahir, Co Tipperary
That’s the 7-spot ladybird with her eggs. It’s likely the birds that came to the feeder had an extra snack.

I found this object on Maghera Beach, near Ardara, Co Donegal. Is it fossilised shells? – Rosemary Tindal, Bruckless, Co Donegal.
The tubes are those of marine worms laid on some hard surface.

I found this stick insect on a rose bush at my home at the end of April. Is it very early in the season to see one? – Peggy O’Shanahan, Sneem, Co Kerry
The eggs of the stick insect, Acanthoxyla inermis, were laid last summer or autumn and they hatch in spring. The unarmed stick is a native of New Zealand which came in on imported plants many decades ago.