Plans for river Dodder ‘greenway’ to be revealed 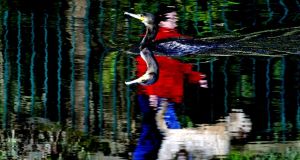 The Dodder: The planned route has meant cyclists and walkers at loggerheads since it was first proposed. Photograph: Cyril Byrne/The Irish Times

Plans for the long-awaited development of a cycling and walking “greenway” along the river Dodder on Dublin’s southside are to be presented to Dublin city councillors on Monday.

The 24km riverside route, from the Grand Canal docks to the Bohernabreena reservoirs at Glenasmole in the Dublin mountains, has seen cyclists and walkers at loggerheads since it was first proposed more than five years ago.

The greenway, which is expected to cost in the region of €22 million, passes through three local authority areas: Dublin city, Dún Laoghaire-Rathdown and South Dublin. The city council will develop the route from the docks to Orwell park in Dartry, which includes a section of Dún Laoghaire-Rathdown lands, while South Dublin County Council will pursue the remaining 14km to the mountains.

While South Dublin has begun the detailed design work for its section, the city council’s route has proved more contentious, with walkers complaining the riverside would become a “cycle superhighway” for commuters, and cyclists criticising the lack of a segregated track for cyclists.

Public consultation on the route conducted by engineering firm RPS last year found while there was broad support for the greenway, there were concerns about potential “conflicts” if cyclists and pedestrians were not physically separated.

Concerns were also expressed about the impact on existing wildlife, ecology and heritage along the river; the use of Miltown Golf Club; that boardwalks and bridges, would be visually obtrusive; and that the greenway would attract anti-social behaviour.

The plans to be presented to councillors representing the southeast of the city on Monday show some alterations to the route from the city to Orwell Park to accommodate these concerns, mostly involving additional segregation.

Labour councillor Dermot Lacey, a member of the Dodder Steering Committee, said he was “excited” about the greenway but some concerns remained about the precise location of the bridge near Ashton’s pub and the proposal to cut down four trees on Eglinton Road. “And I know there remains one big dividing line with the cycling community who feel the full route should be segregated.”

Colm Ryder of the Dublin Cycling Campaign said the route “does not meet what we would like to see from a grade A cycle route, but it is a reasonable in-between option”.

He said he hoped the detailed designs would include “physical separation” and not just painted lines, where segregation was in place.

The council hopes to start the planning process for the route later this year or early 2020.