COP25: Evidence of climate change not being met with urgency from wealthy nations 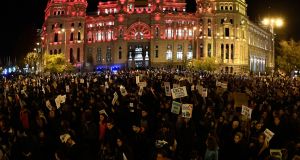 Protesters walk past Madrid’s city hall on Cibeles Square during a mass-march demanding urgent action on the climate crisis from world leaders attending the COP25 summit in the city. Photograph: Oscar Del Pozo/AFP via Getty Images.

Wealthy countries attending the UN climate talks in Madrid, including the world's  largest carbon emitters, have been accused of lagging behind in embracing urgent climate action.

“One would assume increasing scientific evidence would be a springboard for increased ambition and that wealthier countries would be prepared to show a greater commitment on the themes of rapid emission reductions, climate finance and loss and damage,” added Ms Higgins, an observer at the talks.

“Unfortunately, it seems the same dynamics as previous years still exists, with developed countries continuing to lag behind.”

At the launch of a civil society equity report, Lidy Nacpil of the Global Campaign to Demand Climate Justice, said: “This is not about the future, it is about now… [containing global temperature rise to within] 1.5 degrees is not about survival for all of the people of the south but about chances to survive because many people are already not surviving the current impacts of climate change.”

This year delegations are drilling into the finer points of operating the Paris Agreement, which is a technical process, Ms Higgins explained. But members states are in effect “working to decide the fate of climate action for the years to come”.

Despite the European Parliament declaring a state of climate emergency, and ambitious promises from the European Commission president, it appears the commission is considering not revising the union’s NDC before COP26.

“This delay, from one of the main leading negotiation members of the Paris Agreement, would undermine COP26, as well as the whole process of revising the level of ambition and closing the ambition gap,” Ms Higgins added.

“It is key now that EU member states push back on this and ensure the EU remains a leader on tackling climate change, if it does not, other less ambitious states will see it as an excuse to also opt out of announcing improved NDCs in 2020.”

Young people who were present at the talks in large numbers could be the catalyst for better progress, she said, but “the burden should not lie with the young to solve a problem they did not create.

“Their frustration, anger, and messages of urgency will hopefully remind those in positions of power that the only future we have has to be a clean, equitable and just one which is sustainable for all people, young and old, in developing as well as developed counties”.

“This week governments have once again talked the talk, but they are not responding with the ambition that the science and public interest demands. We are on the threshold of a decade in which global emissions must drop by half if we are to have a chance of limiting temperature rise to 1.5 degrees,” she said.

“The Planet, young people, and the poorest communities in the world are screaming for action, for solidarity. When Minister (for Climate Action Richard) Bruton addresses the COP next week we will be watching to see whether he will commit to urgently scale up domestic ambition, and if he will explicitly support an increase in the EU’s 2030 target in line with the science.”

Swedish teenager Greta Thunberg arrived at the summit on Friday morning, having taken a catamaran across the Atlantic, train and electric car to reach the venue. The 16-year-old, who has become the global face of public anger over climate change, has already emerged as the biggest presence at the two-week talks – even before addressing COP25.

She met 40 young climate activists, who held hands as they sang a version of John Lennon’s Power To The People and displayed banners with the logo of FridaysForFuture, the global climate movement she has inspired. She was due to participate in a mass-march in the city centre and to address the gathering.