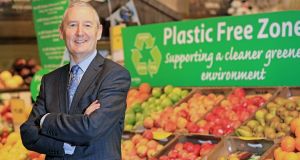 Pursuing climate actions and embracing sustainability are no longer a “nice to have” feel-good blanket as a company’s seeks to market itself to the world; they have to become core to operations. That is the verdict of John Curran head of sustainability with Ireland’s largest grocery distributor, the Musgrave group.

Climate change has become more critical because of the urgent need for society to cut carbon emissions but sustainability is important, so much so both have to move central stage; “front and centre, right up to board level”, Curran believes.

That means no green spin, he stresses, rather a strategic approach – and not just a tactical ploy to out-manoeuvre competitors – that includes “robust plans and targets behind it, and you have to show progress”.

Curran has been head of sustainability for more than 16 years with Musgrave. It is constantly challenged by customers on environmental performance, he notes, while the task is complicated by “a lot of confusion out there on what is the right thing to do”.

Blue Planet II and horror at the impact of plastics on marine life have been the catalyst for change, he believes. This has woken people up, resulting in better understanding of climate change among consumers, within government and across business.

Musgrave is committed to a leadership role including its more than 1,400 retail partners. That means regularly setting up demanding targets underpinned by the UN sustainable development goals (SDGs). It was named by the Government as one of its “SDG champions” in September. It was one of the first businesses globally to integrate SDG principles and their 2030 targets into its day-to-day business activities and is committed to raising public awareness of the goals.

Targets must be very challenging, he says, “because business as usual will not work any more”. Equally, it stretches the organisation, pushing it towards innovation and new solutions. The alternative, he says, “drift and take small steps”.

And the scenario changes. When starting out waste was the big issue, as the country was running out of landfill. Today, we are among the best in Europe in recycling and reducing that demand. Now it’s all about climate action and for Musgrave the SDGs while constantly asking “how do I know I’m focusing on the right thing . . . and avoid being accused of greenwashing”.

Measuring performance against the SDGs is a good way of benchmarking operations, Curran says, though some goals are more relevant than others. A holistic approach requires you to “test yourself on all of them” whether it’s sustainable sourcing, reducing food waste or helping to ease poverty – though climate change influences so many because of its role in migration, conflict and hunger.

He is not a fan of the term “climate emergency” as he believes there is a danger of frightening people or of turning them off doing the right thing. He highlights significant progress: “The awareness phase is over. We are moving to the action phase.”

And there is a need for everybody to take action. The scale of the challenge is such it’s no longer possible for business or government to do it alone. Moreover, the critical need is “not just talking about it, but delivering it”.

Musgrave’s ultimate target is net-zero carbon emissions by 2050, in line with targets set by ambitious countries. He admits it’s not yet 100 per cent clear how to get there but it sets the destination/outcome needed for its team and will be made possible by technologies and opportunities yet to be developed.

Its new sustainability commitments across its operations and retail brands including plans to reduce the company’s carbon footprint in Ireland by 70 per cent by 2025.

Musgrave believes its “taking care of our world’ strategy – 25 commitments to reduce impacts on the environment, improving shoppers’ health and supporting human wellbeing – is a market-leading position; equivalent to removing 20,000 cars off the road per year or 29,000 tonnes of CO2.

– Making 100 per cent of its own-brand, fresh produce and in-store packaging recyclable, reusable or compostable by 2025.

– Operating all facilities with 100 per cent green electricity and sending zero recoverable waste to landfill.

– Ensuring food surplus is used to alleviate food poverty through partnerships with re-distribution charities so food waste is minimised.

In helping its wider retail network “minimise the environmental and climate change impacts of their operations”, many external factors come into play compounding the challenges. Musgrave was the first to develop a compostable coffee cup, but Curran says you can be let down by composting infrastructure issues, whereby products too often end up as litter or go to landfill.

National waste infrastructure has stagnated, and new thinking is required to address contamination of recycling bins to enable changed behaviour. He cites the case of the Frank & Honest compostable coffee cup developed by SuperValu which may soon be levied along with unsustainable cups. “So where is the incentive to lead?”

The issue of plastics in packaging is immensely difficult, not to mention the trend of using lighter and lighter plastic, often a mix of the most difficult ones to recycle. He accepts the need to reduce its use – but not shorten shelf life, increase food waste or undermine food safety.

It’s an issue arousing much concern among consumers, he admits, and it’s not going to go away. “Packaging is a proxy for climate change, because you can see it.”

He would like to see soft plastic being able to go back into the green bin and it being recycled in Ireland and, above all, an end to single-use plastic. Moving more into compostables is not a silver bullet in his view.

– SuperValu has the largest loose fruit and veg offering in the retail sector with trials on additional items such as coffee, tea, spices and cheese in place

– It was the first Irish retailer to introduce 100 per cent reusable compostable shopping bags, removing 2.5 million plastic bags from circulation

– Introduction of compostable fruit and veg bags, leading to the removal of 2.7 million single-use plastic bags

– Issuing of guidelines to own-brand suppliers about plastics reduction

On energy, Musgrave is scaling up self generation, facilitating by a tipping point in large-scale solar power.

– Retail energy savings equivalent to the amount of electricity required to power 17,000 homes

– Its head office is equipped with energy efficiency technology

As a member of Repak, Musgrave funds household recycling bins, bottle banks, collection sites and recycling centres to enable consumers segregate and recycle their waste. This has helped achieve 90 per cent recycling of packaging in Ireland.

It recently launched an eco-range – the largest eco-product range of any Irish retailer – with items such as reusable beeswax wrap to replace clingfilm and sandwich bags.

Aspiration is all very well. Curran points to the “say/do” gap in human environmental behaviour though people may wish to do the right thing. Then there is the communications deficit needed to shift more to doing. That adds up to a lot of behavioural change still needed beside changes in consumption. He applies the “start with yourself” rule, which has stood him in good stead when it comes to living sustainability.