What is this growing on a rotting log in Phoenix Park? Readers’ nature queries 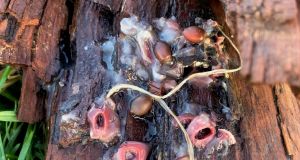 I saw this on a rotting log in the Phoenix Park. It almost looks like a sea anemone. Each one was less than 1cm across. – Stephen Finn, South Circular Road, Dublin 8
It looks like the purple jelly disc fungus, ascocoryne sarcoides, which grows on dead wood.

Since September the crows have been gathering, soaring and dancing in droves in our skyline in the evening, then landing on the high volt electricity wires, each having its own spot. This is something new. – Eileen Dunne, Mullingar, Co Westmeath
Rooks have a pre-dusk gathering before they go to roost. In autumn they are gathering earlier and probably more visible than in summer. And the numbers may also have increased, or two flocks may have joined forces in the gathering.

About rooks foraging for hazel nuts, well I know how they eventually open them. I found them banging the nuts on my roof. – Kath Ni Hora
They also drop shellfish from a height on to rocks to break them open.

This parasitic wasp was very interested in the ivy flowers last month. – Paul Dunne Lettermore, Co Galway
It’s an ichneumon wasp and looks like the black slip wasp, Pimpla instigator, which lays its eggs in the caterpillars like those of the large white butterfly.

The insect in the photo bit a friend of mine and he’s since developed what may be a systemic allergic reaction. It looks like a large mosquito but isn’t October a bit late for them? – Paula Trench, Athlone, Co Westmeath
It was not a mosquito, as appeared in Eye on Nature on November 16th. It was most likely the ichneumon Ophion luteus which, like the previous entry, lays its eggs in various caterpillars.