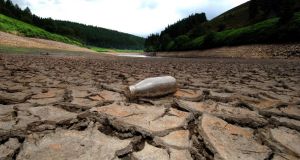 Earth is on course to experience global warming of between 3.5 and 4 degrees by 2100. This will result in an unparalleled climate catastrophe. Photograph: John Giles/PA

Imagine a world where between one and two billion people are exposed to heat and humidity that is consistent with human life expectancy of just six hours.

According to Legal & General Investment Management (LGIM), one of the world’s largest fund managers with more than £1.1 trillion in assets, this is where we’re headed unless radical action is taken to avert the impending climate crisis.

The company has been warning clients that even on the basis of several “optimistic assumptions” to do with the adoption of renewables and the switch to electric vehicles, Earth is on course to experience global warming of between 3.5 and 4 degrees by 2100. This will result in an unparalleled climate catastrophe, it says.

“Parts of India, parts of the Middle East will be exposed for the first time in human history to a combination of heat and humidity such that if you were an adult male sitting in the shade with access to unlimited clean drinking water your maximum life expectancy would be about six hours,” LGIM’s head of commodity research Nick Stansbury said.

The fact that such a stark warning should come from an entity so embedded in the global financial system and with hundreds of billions worth of fossil fuel investments is arresting in itself.

About two years ago, LGIM told Stansbury, one of its brightest analysts, to go away and digest the science around climate change and come back with a comprehensive assessment of the threat for non-specialists. Since then he has been on the road briefing staff and clients, stressing the need to balance environmental as well as financial concerns.

Stansbury, who was in Dublin last week for a client seminar, said the “carbon budget” to limit global warming to 1.5 degrees by the end of the century will be fully exhausted within an incredibly narrow window of time.

“What this means is by 2032 we can no longer emit a single tonne of CO2 and have a 50 per cent probability of staying within the 1.5 degree climate change outcome by 2100,” he said. “So we see this as a problem of the next decade. The next 10 years are going to decide what sort of the climate outcome we end up with.”

With more than $11 trillion invested in the energy sector and many governments dependent on the rents they extract from domestic fossil industries, this is going to involve a “really disruptive, potentially traumatic series of changes that we as investors need to get our heads around”, Stansbury said.

Despite all these incredibly rapid techo-economic changes, we’re still on a pathway towards what scientists predict will be a climate catastrophe

History tells us that these shifts typically take 50-100 years, but the current one will have to be done in a fraction of that time. “On a bunch of detailed but very optimistic assumptions, the world is heading to somewhere between 3.5 and 4 degrees of global warming by 2100 as a best case outcome,” Stansbury said.

“I’m talking about a pathway where by 2050 one in every two cars is electric, I’m talking about a world where renewables – wind and solar – take market share faster than any new source of energy has ever taken share in world history.

“And despite all these incredibly rapid techo-economic changes, we’re still on a pathway towards, what scientists predict will be a climate catastrophe.

“What we are likely to see, for the first time in human history, is parts of the world being so hot and so humid that human beings would not be able to survive for more than a few hours without access to air conditioning,” he said.