Cloud hangs over final day of COP25 as opportunity ‘lost’ 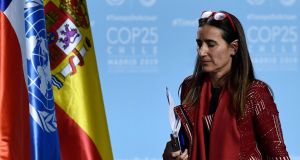 COP25 president Carolina Schmidt called on countries to ‘strengthen political will’ and to accelerate climate action at the pace that the world needs. Photograph: Oscar Del Pozo/AFP via Getty Images

The UN’s longest-ever climate summit drew to a close in Madrid on Sunday after two additional days and nights of difficult negotiations, with agreement only on the “urgent need” for countries to make deeper cuts to carbon emissions.

Aims to reform carbon trading markets to eliminate loopholes and increase supports for developing countries most exposed to climate disruption were not realised despite participating nations having seen unprecedented protests by climate activists in their countries this year.

Environmental organisations expressed dismay at the weak outcome of COP25, while UN secretary-general António Guterres said: “The international community lost an important opportunity to show increased ambition on mitigation, adaptation and finance to tackle the climate crisis. But we must not give up, and I will not give up.”

Mr Guterres had warned at the opening of the talks that, by the end of the coming decade, “we will be on one of two paths, one of which is sleepwalking past the point of no return.”

There was some progress, however, after a “high-ambition coalition” made up of the EU and smaller developing countries pressed for a resolution to ask all governments to formulate stronger national plans on cutting carbon next year.

It is envisaged that political pressure – within the talks process, in behind-the-scenes meetings in world capitals, and from increasingly concerned civil society – will prompt governments to recommit to the 2015 Paris Agreement through updated national plans.

The new generations are waiting for more from us, we have the obligation of being up to this task

Brazil, Australia and Saudi Arabia repeatedly sought to retain loopholes in the use of carbon credits – a system supposedly designed to help reduce CO2 emissions. Other big emitters such as China and India insisted on delivery of financial supports promised by rich countries before next year as a precondition to any discussion on enhancing their current targets.

COP25 president Carolina Schmidt, who chaired the talks, said the agreements reached were “not enough to address the urgency of the crisis on climate change”, and necessary consensus was absent.

She called on countries to “strengthen political will” and to accelerate climate action at the pace that the world needs.

“The new generations are waiting for more from us, we have the obligation of being up to this task.”

Countries were “so very close” to achieving an agreement on carbon markets, Ms Schmidt said, expressing her disappointment the issue would have to be addressed again at COP26 in Glasgow in 2020.

The window of opportunity to achieve the 1.5-degree objective of the Paris Agreement is closing rapidly

Further push-back from rich countries on commitments to provide long-term finance to the most vulnerable further crystallised the tension between the needs of developing countries to scale-up global efforts and the rebuke of a few major economies.

Environmental NGOs said world leaders at COP25 had failed to step up action as global temperatures and emissions continued to rise.

“The window of opportunity to achieve the 1.5-degree objective of the Paris Agreement is closing rapidly,” said Wendel Trio, director of Climate Action Network Europe.