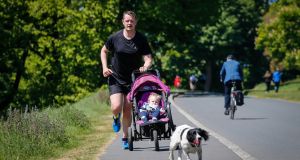 Cars can return to Dublin’s Phoenix Park from Monday, despite pleas from environmental groups to retain Covid-19 restrictions on parking in the city’s premiere outdoor amenity.

The Office of Public Works (OPW) will on Monday reopen the car parks in the Phoenix Park, which have been closed since March.

However, they will be open only from 10am daily to encourage their use for “recreational users” only, and parking along Chesterfield Avenue will remain prohibited.

Since March, cars have been banned from parking in the park, and most roads there have closed to traffic with only the Park Gate Street and Castleknock gates open.

Gardaí have been on duty at both ends of Chesterfield Avenue – the linear road between the two gates – asking motorists their destination and turning back vehicles where there was non-compliance with the Covid-19 movement restrictions.

Gardaí and park rangers have also been patrolling the park to move on any motorists breaking the new rules.

From May 18th, car parks will open from 10am daily, although “dedicated parking areas” will be provided for those taking early morning exercise, and the Phoenix Park Visitor Centre Walled Garden will be used for “cocooning space”from 10am to 1pm, daily.

However, parking will remain banned on Chesterfield Avenue, and instead the parking spaces on the hard shoulder, heavily used by commuters, will become cycle lanes and the existing cycle lanes on the avenue will be used for footpaths.

From June 8th, the perimeter gates, that are currently closed, will reopen to traffic. Parking on the grass or footpaths has always been prohibited, and remains so.

An Taisce and the Irish Cycling Advocacy Network had called on the OPW not to allow cars return to the park.

“The current restriction on through traffic and on the parking of cars along the main avenue shows the park as it should be: a place for recreation, with families able to bring young children to walk, cycle and scoot, with enhanced air quality and amenity for those seeking refuge from polluting urban traffic and noise. This should be the new normal,” a joint letter to the OPW sent on Wednesday said.

In particular, the previous use of Chesterfield Avenue as a “bumper to bumper parking strip for all-day commuters” conflicted with Government sustainable transport policy and the park’s designation as a “national historic park” it said.

The letter commended Dublin City Council’s recent advances in providing more space for cyclists and pedestrians in the city and suggested a “similar initiative be taken to curtail the level of car parking and access” to the Phoenix Park.

The OPW last year published a review of the park’s “visitor experience” which suggested new extensive car parks for certain facilities but said it was keen to reduce through traffic and “tame” the use of the park for commuter parking.