Women leaders are doing better, but not for the reason you might think 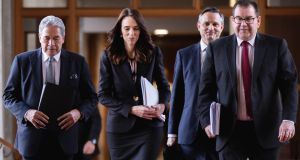 New Zealand’s prime minister Jacinda Ardern has emerged as a champion of governance – thanks to her decisive and early action, her straightforward messaging, and her humane interaction with the concerns of her citizens. Photograph: Dom Thomas/RNZ/Bloomberg

It is perhaps no surprise that the pandemic has unleashed a vicious strain of international competition: Whose death rate is lower? Who can loosen lockdown restrictions first? Who didn’t have to go into lockdown in the first place? Whose leader is shrouding themselves in glory and whose is embarrassing themselves on the global stage?

Amid these crass comparisons – smug superiority taken in one nation’s death toll being lower than another’s is a particularly tasteless offence – one line of thinking has emerged most clearly: Women leaders are more adept at managing Covid-19 than their male counterparts.

New Zealand’s Jacinda Ardern seems to have emerged as a champion of governance – thanks to her decisive and early action, her straightforward messaging, and her humane interaction with the concerns of her citizens (declaring the tooth fairy and the Easter bunny to be essential workers). Though not even Ardern was able to resist the lure of one-upmanship, pointing out that Ireland’s timetable for releasing lockdown was slower than her own.

And it is not just Ardern. We have seen people wax lyrical about Finland, Norway, Iceland, Taiwan and Germany. All led by women, all faring favourably in the coronavirus-response Olympics so many are all too happy to indulge in.

While musing on the relative efficacy of these women leaders in a pandemic, a few shared traits are consistently pulled out: it is thanks to their natural qualities of empathy, compassion and humility that they are excelling. Almost as though men are devoid of these qualities altogether.

Chalking up the success of these women to tired feminine tropes of course glosses over an entire raft of national idiosyncrasies that have nothing to do with the character of their leaders. Population density, long-held cultural mores, geographical location, historic pandemic preparedness and the presence of major international transport hubs are all critical, for a start.

And it is true that Ardern, for example, has distinguished herself with her response – New Zealand’s death rate stands at just 21 out of 1,497 declared cases. But that New Zealand is the 167th least-densely populated country in the world has little to do with whether Ardern is a compassionate or cold leader. And whether she is loved or loathed has equally little bearing on the crucial factor that New Zealand is not a major transport hub, and that its closest major landmass is Australia, 2,000 kilometres away.

But more critically, we should resist the powerful inclination to ascribe the relative triumphs of women amid this crisis to their personal traits. If we are forced to accept that feminine qualities are the source of good government now, then it is hard to avoid the conclusion that the inverse must also be true. Compassion, empathy and humility might help out in a pandemic, but where does that leave women leaders in, say, a trade negotiation between a pugnacious Trump and a suffer-no-fools Phil Hogan character?

Of course there is no gendered element to whether one is adept at navigating a tricky trade negotiation. But we cannot claim in good faith that feminine attributes are critical now, while maintaining they have no impact anywhere else.

In fact, what we are realising is that the efficacy of pandemic response has much less to do with personal characteristics of the leaders in question, and far more to do with the type of countries they lead in the first place. Healthy societies are more likely to generate more female leaders, and healthy societies are also, surprisingly, better equipped to mitigate a pandemic. Helen Lewis was right when she wrote in the Atlantic that strong female leaders are not the cause of, but a “symptom of” good governance.

It should not only strike us as odd, but actively pernicious, that we are happy to resort to gendered stereotypes to explain away differences in national outcomes under a pandemic. It’s taken many years – with a lot more progress to be made – to shake off the presupposition that women cannot be leaders thanks to womanly characteristics. And it has taken as much time to rid ourselves of lazy assumptions that men cannot (or perhaps should not) share these qualities too.

And we should not forget that it is decidedly gauche to assume that women leaders across the world share all these traits – acting as though they are a homogenous group and not individual products of vastly different political cultures. You would be hard pressed to find many similarities between Angela Merkel and Finland’s Sanna Marin. And you do not need to be particularly observant to notice that Jacinda Ardern and Arlene Foster share very little in their personal styles.

We have for too long railed against the prevailing assumption that women cannot hold high office thanks to feminine qualities, only to turn around and declare their current success to be entirely due to those qualities. In eliminating the basic nuance required to make meaningful national comparisons, we are doing a great disservice to women leaders in the first place.