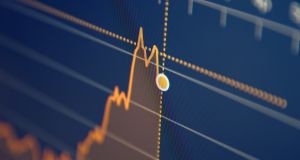 The NTMA has already issued more than €11 billion of bonds this year, with €6 billion raised last month. Photograph: iStock

The National Treasury Management Agency has sold €1.5 billion of bonds, as part of its ongoing programme to meet the costs of the Covid crisis.

The debt management agency auctioned two bonds – one maturing in 2029, and the other in 2050 – hitting its upper target for this week’s debt sale.

The NTMA has already issued more than €11 billion of bonds this year, with €6 billion raised last month alone.

The agency said last month it would raise more than previously planned this year in response to the Covid crisis, targeting between €20 billion and €24 billion in the long-term bond markets in 2020. The agency had originally announced in December it would sell up to €14 billion of securities.

The State’s debt management agency also spent more than €11 billion in April in its biggest bond redemption since before the last financial crisis in a transaction that cut hundreds of million of euro off its annual interest bill.