Dr Tony Holohan has confirmed that the rise in positive Covid-19 tests reported on May 14th - 426 cases reported - is an inflated figure as one hospital did not report an accumulation of positive tests from mid-March through to May. Video: RTÉ 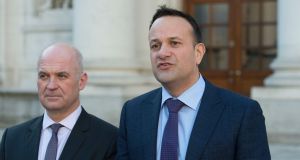 A further ten people have died from Covid-19, bringing to 1,506 the total number of coronavirus-related deaths in the State, the National Public Health Emergency Team (Nphet) announced at its briefing on Thursday evening.

There were 426 new cases of Covid-19 confirmed bringing the total number of cases confirmed over the course of the pandemic to 23,827.

While the daily figure for confirmed infections was the highest for some time, chief medical officer Dr Tony Holohan said most of them related to newly reported cases from a single hospital. Many of these date back to mid-March but Nphet was unaware of them until now, he said.

The reproduction number, a measure of the number of people each case goes on to infect, was stable at 0.4 to 0.6, the Nphet briefing was told.

Prof Philip Nolan, chair of the Nphet epidemiological modelling group, said all indicators of the spread of Covid-19 were decreasing, including the average number new cases daily, the number in hospital and in ICU and the number of deaths each day.

An analysis of cases up to Tuesday shows 57 were female and 43 per cent were male. The median age was 48 years and 13 per cent were hospitalised. A total of 7,123 cases were associated with healthcare workers. Community transmission accounts for 60 per cent of cases.

In Nothern Ireland, five more people have died, bringing the total number of fatalities to 454, the North’s department of health reported.

The department also reported that there were 38 new cases of Covid-19 in the North leaving the total of confirmed cases now at 4,291.

First Minister Arlene Foster and Deputy First Minister Michelle O’Neill said that garden centres and recycling centres in Northern Ireland could re-open from Monday. They also said marriage ceremonies where a person was terminally ill would be permitted.

Taoiseach Leo Varadkar told the Dáil the Government was increasingly confident that phase one of easing restrictions would go ahead on Monday.

He said the virus “is a fire in retreat. We must quench its every spark and stamp out every ember”.

He said Nphet was meeting today and the Cabinet would make a decision tomorrow after receiving its advice.

Speaking in the Dáil during a debate on the impact of the Covid-19 pandemic he said “we are still in phase zero, The moment we assume progress is inevitable, we risk going backwards.”

He said the Government wanted to get the economy “humming”. The Health and Safety Authority (HSA) would work cooperatively with businesses to get them up and running but “it will close workplaces if necessary”.

The Taoiseach also said that, while face coverings, visors and sneeze guards had a role to play, they were no substitute for any of the public health measures including hand washing, social distancing, correct coughing and sneezing protocols and self isolation where necessary.

Nphet is expected to recommend the advisory - but not mandatory - wearing of face coverings on public transport and in shops from next week.

Concern surrounding a growing number of Covid-19 clusters in meat processing plants was raised in the Dáil, with Fianna Fáil leader Micheál Martin describing the situation as “gravely serious”.

Mr Martin said “there has been a significant lack of transparency on this issue.”

Rise TD Paul Murphy told the Dáil that 200 complaints had been made about workplace breaches of Covid-19 guidelines including at meat plants but no inspections had been carried out by the HSA.

Siptu union organiser Greg Ennis said on Thursday the number of confirmed cases in meat processing plans in the Republic had now risen above 600.

Meanwhile, discussions are continuing on plans to reoopen schools in September, with school managers and teachers saying primary schools would need to reopen on a phased basis with smaller class sizes and pupils attending on certain days of the week.

The Irish National Teachers’ Organisation’s (INTO) told the Department of Education not all children in a class would be able to attend school every day due to social distancing rules and distance learning would need to continue.

Teachers, it said, cannot be expected to provide remote teaching and learning for pupils at home after or alongside teaching the pupils who were attending school.

The trade union document was submitted as part of the department’s consultation process over the planned reopening in September.

Professor Karina Butler, Consultant Paediatrician and Infectious Diseases Specialist warned that emerging data on children and Covid-19 infection was based on “very small amounts of evidence”.

While the data was encouraging, Prof Butler told RTÉ radio’s Morning Ireland “we are on a learning curve”.

“We won’t know until we do antibody testing, that will give us a better handle.”

There could be practical reasons why children are not as easily infected as adults such as they don’t have a forceful cough and they catch common colds and viruses all the time and therefore may have more immunity.

“There are lots of potential reasons and there is conflicting data on that.”

When asked about the possibility of schools reopening soon, Prof Butler said it came down to balancing of risk. “There is no such thing as a risk free environment.”

The president of the Irish Emergency Medicine Association, Dr Emily O’Connor earlier warned of the “nightmare scenario” that could develop in hospitals in the autumn when schools and activities resume which could lead to a second wave of Covid-19.

Dr O’Connor said there was a need to “re-set” how emergency departments operated. “We cannot go back to them being overcrowded again.”

The cancellation of elective surgeries, improved discharges and greater reliance on services such as virtual clinics had all increased bed capacity. It was important for patients to spend as short a time as possible in a congregated system especially with an airborne virus like Covid-19, she said.

“We are asking the public, the government and the HSE to ensure that this doesn’t happen.”