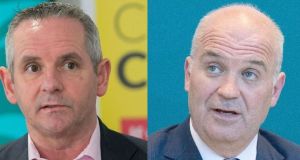 HSE ceo Paul Reid (left) said the announcement by chief medical officer Dr Tony Holohan (right) bore ‘absolutely no resemblance to that which we previously discussed and has taken no account of what can be achieved by when’. Photographs: Gareth Chaney/Collin Keegan/Collins

Newly-released correspondence shows serious tensions at the very highest levels of the HSE over what it saw as attempts by the National Public Health Emergency Team (Nphet) to pressure it into providing 100,000 Covid-19 tests per week without adequate advance consultations or preparations.

The head of the HSE Paul Reid wrote to the secretary general of the Department of Health and its chairman Ciaran Devane wrote to Minister for Health Simon Harris in mid-April to express concerns about an announcement by Nphet for the level of testing for Covid-19 to be increased to 100,000 people a week, operating on a seven-day-a-week basis, for a minimum of six months.

Mr Reid in his letter to the department on April 19th said the Nphet direction bore “absolutely no resemblance to that which we previously discussed and has taken no account of what can be achieved by when”.

He also said the announcement of plans to test all residents in long-stay facilities, “in the absence of detailed operational considerations and clear requirements for guidance on prioritisation, introduces considerable risk to the continuity of service in these settings”.

Mr Devane said in his letter to the Minister that it had “been clear to me and to the board of the HSE for a while that operational requirements have at times not adequately been considered at the centre of Nphet’s decision making”.

The Irish Times reported in late April that there were serious tensions between the HSE and the Nphet over the plans to increase testing and that the chief executive and the chairman had written to the department to complain about the announcement.

The department published the letters on Thursday afternoon. The letters had been sought for a number of weeks by Labour Party leader Alan Kelly who described them as “explosive” in the Dáil on Thursday.

The Tipperary TD said Minister for Health Simon Harris and the Taoiseach denied there had been tensions “when we now have it in black and white there were real issues particularly in the roll out of testing”.

Mr Harris said, however, that Nphet was chaired by Dr Holohan and gave public health advice but the Government “makes decisions”. He said the emergency team was a collaborative body and nine of its members were from the HSE.

“I don’t think the letters are explosive. I think what the letters show is people working extraordinarily hard in real time,” the Minister said.

He added that, of course, there were tensions. “When has there never been back and forth between officials working their backside off to try in a global pandemic to save people’s lives?” he asked.

“I’m very satisfied that the Nphet is working extremely well with the HSE,” he said.

When Mr Kelly said that Dr Holohan’s announcement about ramping up testing was outside the agreed process, the Ministrer replied that the HSE and Nphet were not infallible. “None of us are.”

In his correspondence Mr Reid said he had been very surprised to read a letter from the chief medical officer at the department Dr Tony Holohan just before 9pm on April 17th and also by a Nphet press conference a little earlier at which the increase testing plan had been announced.

“At the Cabinet committee on Tuesday 14th April, I presented a paper which set out the current capacity with regard to testing and tracing. Following this, a meeting was called by Secretary General Fraser for the afternoon of Friday 17th April, at which Dr Holohan and both you and I attended.

“An action from this meeting was that ‘Department of Health to confirm position re (i) testing and contact tracing capacity and (ii) health service capacity on Friday 24th April’. There was no mention at this meeting of the directions that were to issue from the NPHET that evening.

“A Cabinet Committee meeting is also scheduled for Monday 20th April at which we are to provide a further update on testing and tracing capacity. Separate to this, and at the request of Dr Holohan, we had committed to developing a paper for consideration and approval at the Nphet meeting on the 21st April 2020. That in itself is no small undertaking, and we have been working intensively to ensure that the Department receives a response that is both thorough and capable of rapid implementation.

“I had updated the chairman and the board of the HSE in this regard on Wednesday 15th April and I am to present on the same topic to the HSE Board on Friday 24th April.

“Given that all of this was agreed, I am extremely disappointed that these understandings appear not to have been respected. I’m at a loss as to why this direction from the Nphet to the HSE was given and publicly communicated without completing the jointly agreed processes and without regard to appropriate governance. The directions set out effectively attempted to commit the HSE to an intensity of implementation which bears absolutely no resemblance to that which we previously discussed and has taken no account of what can be achieved by when.”

Mr Devane in his letter to Mr Harris said the chief medical officer’s letter and the press conference had “both cut across and pre-empted the process which had been agreed to develop the implementation plan in order to meet and exceed the target of 100,000 tests per week”.

“This paper was to be brought to Nphet, the HSE Board and the Cabinet Committee this coming week.”

Mr Reid in a separate note to the department said scaling up to providing 15,000 community referrals per day, seven days per week would require engagement with GPs and GP bodies regarding the demand volumes and weekend service model.

He said at that point the maximum current community swabbing was approximately 7,000 swabs. He said it would take a number of days to scale up to this with the full time operating of 48 community testing centres.

Mr Reid said scaling up to 15,000 would require 30 laboratories working at full capacity.

“Some of the new laboratory capacity is brand new and will require time to scale up testing output.

“A comprehensive strategy on laboratory testing would take this into consideration, prioritise actions to mitigate the risks and ensure we have robust prioritisation guidance and protocols in place that allow us to ensure that all available capacity is at all times directed to areas of greatest need.”

Mr Reid said the HSE did not have at that point sufficient mobile community testing or National Ambulance Service capacity to test all residents and staff in long term residential facilities over the next week to ten days.

“This is an enormous and complex undertaking.”

Work began on the development of a plan to increase this capacity on the evening of the April 17th.

“The announcement of this decision, in the absence of detailed operational considerations and clear requirements for guidance on prioritisation introduces, introduces considerable risk to the continuity of service in these settings.”

1 Covid-19: Travel restrictions to stay and 'green list' put on hold amid fears of second wave
2 Taoiseach ‘disappointed’ he only learned of Barry Cowen’s driving ban on Friday
3 Ireland should get ‘epidemic under control’ before looking at foreign travel
4 Bobby Storey: The IRA's planner and enforcer who stayed in the shadows
5 ‘Unseasonably’ windy weather set to buffet Ireland
Real news has value SUBSCRIBE