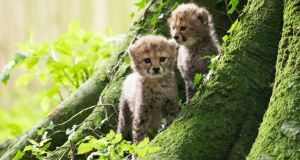 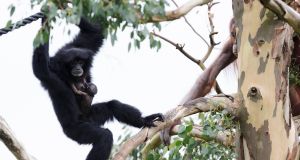 The cubs, one male and two females, were born on June 10th and have only recently started venturing out of their cubbing den. They have spent the last few days enjoying the mild weather playing together in the grass and on the logs of their habitat on Cheetah Hill in Fota.

Fota Wildlife Park, a conservation charity, estimates it lost €1.5 million in revenues during the 10-week closure earlier in the year due to Covid-19. Since then it has introduced an online booking system to safely manage the numbers entering the Park – capping the maximum amount of people at any one time within the 100-acre park at 1,500.

The International Union for the Conservation of Nature has classified the subspecies status for the Northern cheetah as endangered. Lead ranger at Fota Julien Fonteneau, said they are delighted to be announcing a second litter of Northern cheetah cubs since reopening in May.

“Without a doubt, the Northern cheetah is the most successful breeding programme here and the species has become synonymous with the Park – it’s even on our logo. We put that breeding success down to the naturalistic habitats and environments that we create for the animals.”

Dublin Zoo is also celebrating following the arrival of a baby siamang gibbon. It is a primate and the largest of the gibbon species. They are black-furred apes with very long arms, much longer than their legs. They are also the only gibbons with both opposable thumbs and toes. They can weigh between 10 to 12 kgs and have large throat pouches which allow them to vocalise and sing. They can often be heard singing in Dublin Zoo from 10 to 11am each day.

The baby was born overnight last Sunday to parents Cahaya (10) and Luca (19). Before this arrival they were the only siamang gibbons at Dublin Zoo, with Cahaya arriving in 2014 and Luca in 2018.

It was love at first sight – or at least “ a strong connection from the very first day they met”, according to staff who said “the healthy baby is exceptionally welcome news for everyone involved with the zoo”.

Ciaran McMahon, team leader at Dublin Zoo added: “We are absolutely delighted to welcome this siamang gibbon baby to Dublin Zoo. The species is listed as endangered so every birth is extremely important. Cahaya and Luca are the most loving couple, very attentive to each other’s needs, and we have no doubt that they will make excellent parents.”

Siamang gibbons are listed as endangered on the IUCN Red List. Their natural habitat is the canopy of semi-deciduous and evergreen forests in the Barisan Mountains of west-central Sumatra, Indonesia, the mountains of the Malay Peninsula, Malaysia, and in a small southern peninsular area of Thailand.

Dublin Zoo, a not-for-profit organisation, is also currently operating at a reduced capacity due to Covid-19, and tickets must be booked online in advance.