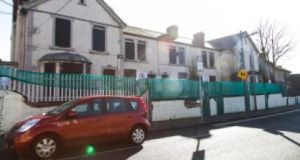 Grangegorman Villas in Dublin is included on the vacant site register.

Two State bodies are among six property-owners to appeal their inclusion on Dublin City Council’s register of vacant sites set up to stop the hoarding of prime housing land.

Dublin City Council, the State’s largest local authority, expects to put at least 385 properties on its register in the coming months. So far it has published details of 36 sites with a total market value of almost €117 million.

Seven of the sites have been identified by the council as being in the ownership of State organisations, six more sites are city council owned, two are owned by public hospitals, and the remaining 21 are privately owned.

Property owners have 28 days to object to their site being put on the register after they are notified by the council.

If the council decides the property should still be on the register, the owner has another 28 days to appeal the decision to An Bord Pleanála. The register of vacant sites allows local authorities to impose a 3 per cent levy and came into force last January.

The Health Service Executive (HSE) and the Office of Public Works (OPW) have both lodged appeals with An Bord Pleanála against their inclusion on the register.

The OPW owns two of the sites on the register with a combined value of more than €17 million.

One of the sites, at the corner of St John’s Road West and Military Road, near Heuston Station, is alone worth an estimated €12 million, making it one of the most expensive sites on the register. The other OPW site is also on Military Road, a smaller site it has a value of €5.25 million.

Both sites have been designated for an €80 million development to accommodate “high security, specialist and sensitive Garda operational units” and were therefore “not areas in which housing is required” the OPW said.

The HSE owns five late Victorian houses at Grangegorman Villas which are derelict and boarded up and have been valued at just €500,000.

The HSE said it intended to develop the property but there were unavoidable delays because of the “dangerous condition” of the buildings.

It said the council was aware of these issues and it was “very disappointed” to have been included on the register.

Of the other three sites under appeal to the board, the most expensive site is owned by Crekav, part of the Marlet/New Generation Homes group, one of the largest residential builders in Dublin, with sites across the city.

The site listed on the register is in Portobello, at the corner of Lennox Street and South Richmond Street, the road that leads Rathmines, and is worth €4 million.

Due to the condition of the site, Marlet said it was “incapable of being used for housing” and Crekav had instead applied for, and secured, planning permission from the council for a commercial development.

A site at Hyacinth Street, North Strand, owned by David Lambe has been valued at €1.5 million, another, which backs onto Cork Street and Emerald Square owned by Kathleen Keville is worth €1 million.

Mr Lambe said his site was not vacant but was in use by the Alexandra School of Motoring. The family of Mrs Keville said she had not been properly notified, and that a large part of the site was her garden.

1 Tributes paid to Ireland’s deputy ambassador to China who died on Sunday
2 Coronavirus: No new Covid-19 deaths reported in State for first time since March
3 Coronavirus: What will reopen in Ireland’s phases to ease restrictions and what are the dates?
4 Unidentified man has been in Irish psychiatric hospital for 30 years
5 Man admits rape of boy after drugging him with pain relief substance, court told
Real news has value SUBSCRIBE