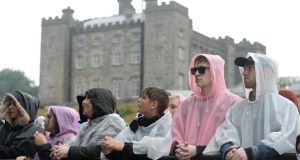 A week of glorious sunshine and high temperatures turned nasty this weekend as torrential rain spread nationwide and even caused flooding in Dublin’s city centre on Saturday.

The good news is though that this exceptionally heavy rain is not set to last.

Met Éireann has forecast “changeable and unsettled weather” with “some rain at times, but good dry intervals” for the rest of the week.

Rainfall levels will be “well below normal” in most areas with temperatures of up to 20 degrees forecast.

Monday will start off with some remaining rain and drizzle in parts of Ulster which will clear away to become “brighter and mainly dry for the afternoon”.

There will be sunny spells as well as cloud and “well scattered showers” while temperatures will stay between 16 to 19 degrees.

The rest of the week is forecast to be similarly hot with scattered showers and sunny spells in places.

This changeable weather follows on from what was the hottest week of the year so far, where temperatures reached 25 degrees in places.

Temperatures at Malin Head, Co Donegal reached 25.1 degrees for three consecutive hours on Thursday, the highest since records began in 1885, beating a previous high of 24.7 degrees recorded on May 31st, 1978.

According to Gerald Fleming of Met Éireann, the best of the weather was in the midlands and northwest with temperatures well into the 20s in Galway, Roscommon, Mayo and Donegal.