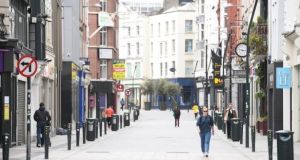 The ESRI study shows that about half of minimum wage employees are working in hospitality and retail businesses, most of which have been forced to close during the pandemic

Some minimum wage earners are significantly better off if they lose their jobs and claim the pandemic unemployment payment, new research confirms.

The report from the Economic and Social Research Institute (ESRI) finds that low-paid part-time workers in the hospitality and retail sectors can receive up to 50 per cent more from the temporary payment than they would working.

Minimum wage employees in retail or accommodation and food work on average 23 hours per week. This equates to a gross weekly wage of €232.30. Those who have lost their job, however, may claim €350 per week through the PUP payment, ESRI said.

The institute warned that as a result of receiving more from the payment some of those in receipt of the benefit “may be less willing to accept a job now than before the crisis”.

Yet it notes that the payment is only a temporary measure, with expectations that it will be phased out shortly.

The institute also points out that some retailers, such as supermarket chains, remain open, with many having taken on additional employees and bumped up wages during the crisis.

The findings have implications as the minimum wage has been shown to be important in keeping wage inequality low during a recession, and acts as a stepping-stone to higher pay.

Davy Stockbrokers chief economist Conall MacCoille recently caused upset when he said the “generous terms” of the Government’s Covid-19 unemployment scheme and a lack of rigorous checking had created a financial incentive for people to leave work.

The ESRI study suggests that low-paid workers are likely to have been disproportionately impacted by job losses during the Covid-19 crisis because almost half of them work in sectors that have faced widespread disruption.

It shows that about 50 per cent of minimum wage employees are working in hospitality and retail businesses, most of which have been forced to close during the pandemic.

The current minimum wage in the Republic as of January is €10.10 per hour for an experienced adult worker. Currently 8 per cent of all employees in the State are classed as minimum wage workers.

According to the study, it is mainly women, part-time workers, those with lower education levels, non-Irish nationals and those on temporary employment contracts who are on the minimum wage.