What will people do with their lockdown savings? 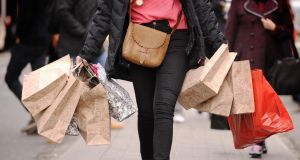 ‘By 2022 there is likely to be an exceptional rise in expenditure on the things we can’t spend on today.’ File photo. Photograph: Dominic Lipinski/PA

One of the unique outcomes of the collapse in economic activity due to the lockdown is the impact on household spending. Unlike the economic slump of 2008-2011, when the 15 per cent fall in consumption matched the fall in household disposable income, this time round the drop in spending will go well beyond any reduction in incomes.

This is despite incomes being better protected than a decade ago. In our earlier economic crash, households cut spending because their incomes fell. At the moment, spending is down not only because some incomes have taken a hit, but also because most shops and the hospitality industry remain closed.

The social welfare system provided valuable insulation from 2008 on. However, most incomes fell significantly. This time round, the support to maintain personal incomes is on a different scale. ESRI research last month shows that the very rapid response by the State to the present crisis, through the introduction of special welfare payments and wage subsidies, has cushioned the losses for those becoming unemployed or whose jobs are on hold.

Although the unemployed have seen their earnings collapse, on average about three-quarters of this loss will be made good through welfare payments and lower taxes.

The results will be uneven: for a surprising number of households they will be slightly better off and, while many of those laid off will be worse off, their losses will be limited.

The unusual feature of this crisis therefore is the fact that the massive drop in consumption by households is not because of a collapse in household income, but rather because consumers are not able to spend their money. The result is going to be a big rise in household savings.

By the end of this year households will have between €10 billion and €15 billion extra in their bank accounts because they could not spend it. This will amount to roughly half of the borrowing by Government.

The last time in Ireland that consumers had income but could not spend it was during the second World War. Then, incomes, especially farm income, rose as food was exported to wartime UK, but it was impossible to import anything. As a result, between 1938 and 1944, household expenditure on clothing, fuel, and other goods fell by between 50 per cent and 60 per cent.

For example, the number of shirts sold fell by 50 per cent and the volume of sales of bed linen dropped by 70 per cent.

Instead of increasing spending on food, drink or the limited services that were available, households preferred to save. Today, in the same way, the money that we would normally spend on tourism, pubs, fashion and hairdressing is also being saved. Petrol and diesel sales have fallen as commuters work from home.

The key question now is what will households do with their savings? Next year will probably be too soon but if coronavirus is tamed by 2022 there is likely to be an exceptional rise in expenditure on the things we can’t spend on today. Some of the savings may also be used as deposits for the reduced supply of housing, with likely inflationary consequences.

Tourism, eating out and entertainment will probably see a major recovery, which will be some compensation for such businesses, if they can survive that long. Heavily tourism-dependent countries such as Spain, Italy, Greece and Portugal will also wait until 2022 for any return to previous levels of travel.

When delayed consumer spending finally lifts off, a good share of it will land back in the government coffers as tax revenue, which can help in paying for today’s level of crisis supports.

Much will depend on how rapidly the economy returns to a normal level of activity. The Department of Finance Stability Programme Update, published last month, envisages a substantial recovery by the end of the year. Nonetheless this would still see unemployment remaining well above 10 per cent in December, and unemployment levels would still be a problem at the end of 2021.

This will pose a challenge for the incoming government. While the very generous income supports are appropriate today and can be funded by borrowing, they cannot continue at this rate. Winding them down as the economy begins to recover will be a delicate task.