Meet the enterprising publicans bringing pints to your door 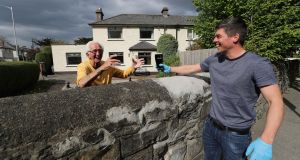 Liam Tilly, a resident of Bath Avenue Gardens, taking delivery of a pint from Brian O’Malley of the Bath Pub in Ballsbridge, Dublin 4. Photograph: Nick Bradshaw

Located in the shadow of Dublin’s Aviva stadium, the Bath pub pitches itself as “the perfect place to soak up the big match or concert atmosphere”. However, after finding itself shut under the Covid-19 restrictions, it has had to eke out a new way of doing business.

With all matches, concerts and large gatherings currently banned, co-owner Brian O’Malley and his team decided that if people couldn’t come to the pub, then they would bring the pub to the people, delivering draught pints to customers’ homes.

“We set it up last weekend with the good weather and there was loads of positive feedback,” he says. “Everybody seems to really appreciate it. It’s great for the staff to be out and about, and energised again.

“People love the novelty of it. It’s been mainly pints, but we’ve also done a few bottles of rosé with the warm weather. Guinness has been a huge hit, but Heineken and Bulmers have been popular, too.”

The system works by customers calling the pub and making an order. The drinks are paid for by card over the phone and delivered in a tray with a seal over the top.

“We’ve no problem delivering one or two pints to immediate neighbours, but for everyone else it’s a minimum order of €20,” says O’Malley. “We travel a radius of about two kilometres. It’s a lot easier to throw a pint over the bar than to bring it to someone’s home, so it’s much more labour-intensive,” he said.

“We’re planning to introduce cocktails this weekend and the weather forecast is good, so we’re hopeful that will be a success.”

The Bath isn’t the only pub to adopt such a system since the lockdown. Mark Grainger of Grainger’s Hanlon’s Corner on the North Circular Road got the idea about six weeks ago when a customer just out of hospital asked him to drop two pints around to his home.

“On the way back in the car, I had the idea that there might be a market in this in the medium term,” he says. “So we put it up on Facebook and the idea took off from there.

“You have to order a minimum of four pints because there are costs involved for us in terms of people to deliver them, and petrol. Pints cost €6 and the deliveryman gets €3 per delivery.

“We put the pints into a container, and the container fits into a special icebox. We also have lids for the pints. Customers have to pay over the phone by card, and we leave the pints at the door or on the roof of the car for people to get.”

Trade is “very busy”, he says, with the pub selling about 300 pints a day, mostly Guinness.

“We also get a lot of calls from abroad from people wanting to have pints delivered to family or friends in the locality. We’ve had calls from the US, Australia and Dubai. I had someone ring me up from Istanbul today looking for four pints to be dropped around to her partner on Clanbrassil Street. They’re delighted with the service.”

One of his deliverymen, Gerry Mangan, is not a deliveryman by trade, but simply drank in the pub before the lockdown.

“It’s not something I ever saw myself doing,” he says. “I was delivering to a man who is cocooning last week. I was coming down the driveway with a full Sunday roast and a few bottles of wine and I could see him looking out the window waiting for me. He was all smiles as I arrived.”